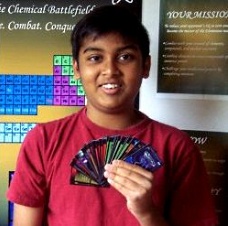 Silicon Valley is famed for being home to youthful entrepreneurs. Usually that means people in their 20s or 30s, but some, like Anshul Samar, haven’t even made it out of their teens yet.

Samar is the 14 year old CEO of Elementeo, an educational gaming startup that we first covered a year ago. The company’s eponymous first game has just begun shipping, following its development by a team of artists around the world. The basic idea behind Elementeo is to combine chemistry facts with fantasy in a board-based card game. Samar runs the company out of his home in the Bay Area.

Now that the game is available (it can be bought here, for $24.95), the company will work on marketing it and creating versions for other age groups. Samar is also looking for angel investors to help support Elementeo’s development.

VentureBeat: A year ago, you were still working on the game. What has happened since then?

Samar: We hired artists from all around the world to work on the game and design it in such a way as to show chemistry as a side-affect of fantasy. The idea was to give every element a personality.

We also went to a lot of different places. We went to Washington, D.C. And we went to the American Chemical Society conference in New Orleans. I showed my chemistry game there, and it was a hit. They pre-ordered 50 games.

But for the last two months, we’ve just been working on finishing up the game. And now it’s out. 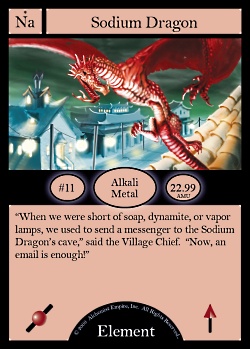 VB: What’s the experience like, of working on the company and also going to school?

AS: Most of the work gets done on weekends. During development it took many, many hours. But it wasn’t your standard startup, not 60 hours a week. After homework, it’s maybe an hour, and on weekends 5-6 hours a day.

My whole family is involved as well. My sister is developing another version, my mom is working on sales and fulfillment.

AS: VCs did contact us, and we must have had a half-dozen meetings. But we wanted to go at our own pace. We knew, if you take VC, you’re working 60 hours a week and going at a very fast pace. At that time, with school, we wanted to go slow.

Later we contacted the VCs and said we were ready to talk again. But at that time, they said their goals didn’t match with me. I’m going to highschool, and they want someone who’s working a lot.

So far, the money has come from my father.

VB: Didn’t you consider dropping out of school?

AS: I would never imagine dropping out of school, at all. It’s one of those things — I really like school. I didn’t really spend time thinking about it.

VB: So how did enough work get done to complete the game and start shipping it?

AS: The artwork is one of the things that really brings this game to life. I created the game and the descriptions and fantasy aspects. But the artists really helped bring it to life. They have a big role.

My dad’s an advisor, and he was an entrepreneur himself. My mom spends a lot of time on the orders and shipping. And my sister is working on Elementeo Kids, which is a version for 1st to 3rd graders. She’s 12. 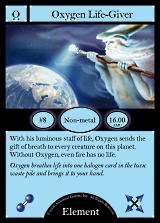 VB: Would you still be able to pull if off if you didn’t come from an entrepreneurial family? What about a poor one?

But my dad’s not in the game industry, so there’s a limit to what he can tell me. There was a whole bunch I ventured into without any hand to hold. Silicon Valley isn’t the place for games — Seattle is.

The important thing is to start this entrepreneurial spirit, this feel for wanting to do something. If someone has that passion in Nashville, Tennessee, wanting to do something and create an idea, conquer the world, it’s possible. You can definitely do it. I think all it really takes is determination. In general, you don’t see that many CEOs that are 13,14, 15, 16. All of these obstacles out there, for someone in Nashville it might be not having anyone to advise you. But if the business spirit is there, they can totally do it.

VB: Did you receive any help from people outside your family?

There’s this entrepreneurial group in Silicon Valley. They might not be there in Nashville, but if you reach out and talk to people, make contacts, I think it can happen. [Editor’s note: Peter Atkinson is located in Seattle.] 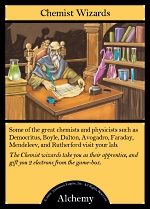 VB: And the money issue? You said your dad helped out. Could a kid with no money do the same?

AS: When I was in 6th grade, I applied for a grant. I didn’t even ask my dad for anything. The California Association for the Gifted gave me $500. It was like my pre-, pre- seed funding. That $500 is what got me going for the next two years. It would have been very hard to start this without someone trusting me, a 13 year old, with $500.

But it’s true that if you don’t have money, it’s hard to do anything. That’s actually one of my personal goals, as an entrepreneur. There are a lot of youth in the world with an idea. They don’t have someone to believe in them, and they don’t have the money to do it. A lot of people out there don’t have encouragement. I want to give $500, $1,000, $2,000 grants to youth around the world. Someone might read this interview and say, I don’t have the money. But $500 can take you a lot of places. You just need that catalyst to get you started.

I’m interested in starting that fund as soon as possible.

VB: Does it look like Elementeo will be a success?

A lot of the marketing has happened on its own. We’ve gotten a lot of press from many places. That puts people on the website, and once they’re there they just order. Fox, ABC, NBC, NPR — people really like the idea, and they’re putting it in the newspapers and reading the newspapers. They’re getting on and ordering the game.