Mpowerplayer, a startup that helps people buy mobile games, has raised $2.5 million in a first round of funding.

The funding announcement comes only a month after Mpowerplayer “graduated” from the LaunchBox Digital incubation program. But unlike most of the other Launchbox startups, Mpowerplayer had already started to establish itself — when I spoke to chief executive Michael Powers at the demo day in August, he said the company had already served 15 million mobile game demos. 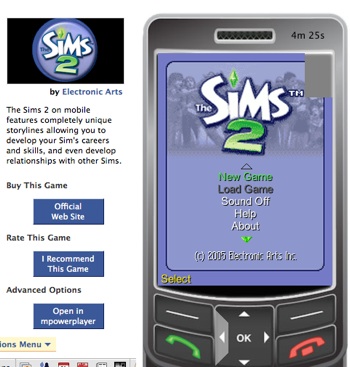 Powers’ key idea was to find a new way to connect people, especially casual gamers, with mobile games. Searching for games on your mobile device, especially if it’s not a fancy smartphone, can be pain, Powers argued, whereas it’s easier for people to browse through games on their computers. If you find a game you’re interested in, Mpowerplayer then lets you try out a 5-minute demo on a mobile phone emulator. The Reston, Va.-based company also recently released an application for Facebook, and has plans for similar apps on other social networks.

By targeting people on their PCs, Mpowerplayer has the potential to reach a huge untapped audience for mobile games. To be honest, however, I’m still scratching my head about whether Mpowerplayer’s emulator-on-a-PC approach makes sense as a service people will use again and again — at some point, isn’t it easier to just play game demos (assuming they’re available) on your phone?