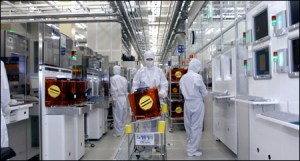 It takes about $13 billion in revenues over five years to justify a big investment in next-generation chip manufacturing technology. That explains why the ranks of chip makers are thinning out.

Walter Ng, a vice president at Chartered Semiconductor Manufacturing, one of the big contract chip manufacturers, said that the math just doesn’t add up for many companies to keep their own chip factories. Big companies such as Intel can afford to spend a couple of billion dollars on a chip manufacturing process — which is the recipe for making chips. Then they have to spend $2 billion or so on each factory and its accompanying chip-making equipment.

The $13 billion figure represents a six-fold return on the investment into a chip process investment of $2 billion, which is the estimated cost for the newest 45-nanometer factories being built now. Ng was one of the speakers today at the Global Semiconductor Alliance Intellectual Property conference in Santa Clara, Calif. If chip makers can’t make that much revenue in five years, then they have to consider farming out their chip production to companies such as Singapore-based Chartered or its Taiwanese rivals, Taiwan Semiconductor Manufacturing Co. or UMC.

It’s no surprise that a lot of chip makers are joining together in alliances to jointly develop the chipmaking processes. It’s a smart use of resources to share the costs with someone else. IBM leads an alliance of chip makers that includes Advanced Micro Devices and others. Texas Instruments said it would develop a 45-nm process but after that it would likely ally itself with others.

The risks involved in doing chip R&D have led to foundries doing a lot of the production for hundreds of fabless chip companies. Nvidia is one of the most successful of these fabless companies. But much of the growth in the chip business is now in IP companies, or those that develop a component that can be reused in a number of chip designs.

Jordan Selburn, an analyst at iSuppli, said that the IP market hit $1.5 billion in revenues in 2007, with ARM, the mobile processor IP developer, accounting for 34 percent of market sales. Adam Traidman, a group marketing director at chip design software company Cadence Design Systems, said that there are more than 300 companies that focus on making IP for chips.

Selburn said that IP revenues should grow twice as fast as the overall chip market in the coming years. Logically, then, the best place to invest in the chip industry these days is the IP market.

That way, you don’t have to cut a $2 billion check.