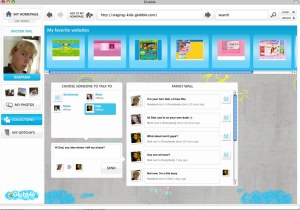 Glubble intends to make the Internet safe for kids and their parents to surf together.

The London-based company is launching Glubble for Families, the second version of its Firefox browser-based online activity center for families with kids under 12. The new version takes what was a browser filter and upgrades it into a social networking tool for families to share pictures, schedule events, and chat in a secure manner.

The software uses a plug-in for Firefox that makes it possible for kids to surf an approved list of web sites and to communicate with their families.

The first version came out a year ago and was downloaded more than 300,000 times. It has 200,00 active users and usage is up 300 percent in the last quarter, said Alexander Van Elsas, senior vice president of operations at Glubble. Kids can use the Glubble client to surf 2,500 ad-free web sites that have been pre-approved by parents.

The new version has features including Kids Pages, Collections of fun web sites, secure chat and instant messaging, photo albums and downloadable Play Art. Families can set up their own web pages where they can communicate with each other and share photos. They can leave messages, such as birthday reminders, on a Facebook-like Message Wall. Users are sending 10,000 messages a week.

The family networks are secure because access to them must be granted by the parent who creates the family site. When kids are using the brower, they won’t be able to access any other part of the computer except the Glubble-approved web sites. Google search results can be intercepted and filtered. 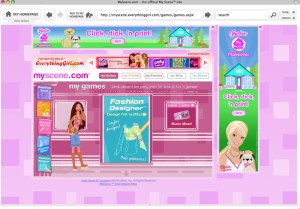 If kids want to add a web site that isn’t on the list, they can do so with the permission of a parent or guardian.  When that happens, Glubble sends a message to the parent, who, upon logging in via a web site, can approve or reject the request on the spot. Parents can actually join kids as they surf the web, said Willem-Jan Schutte, co-founder and chief executive of Glubble. The whole point is to bring families together, just as other activities such as reading books or playing sports do.

The company was founded in early 2007. It raised $1 million in a first round and then raised $3 million earlier this year. It has 30 employees. The company will distribute Glubble through partners, which include Highlights Magazine, Sittercity and Yahoo.

Schutte said that an Internet Explorer version will debut before the end of the year but a Safari version isn’t likely to be out soon. He said the software works on just about any web site and can surf on game sites that make heavy use of Adobe’s Flash software.

The company doesn’t have direct competition but it does have indirect rivals such as filtering software. Parents can use software such as NetNanny, Cyber Patrol, and Cyber City to filter out inappropriate web content. Most of the users are in the U.S. and the U.K., but the software is used in 125 countries.