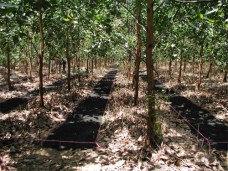 Biochar: Remember that word. While it may not be part of most investors’ vocabulary, biochar, a form of charcoal produced when organic matter is burned in the absence of oxygen, can store carbon and increase soil fertility — making it a more ideal alternative to some costly and complex carbon capture and storage (CCS) technologies. Ecovolve has the idea of pairing the production of biochar with the development of small-scale distributed energy systems.

The New York City, NY-based company, founded a few months ago by a group of ambitious Princeton graduates, uses the above-described burning process, called pyrolysis, to produce energy from waste wood, agricultural residues and other non-food feedstocks. In addition to producing gases that are readily converted into electricity, Ecovolve’s systems also make biochar as a by-product.

To avoid the need for expensive equipment, the company first turns its raw biomass into bio-oil, a mixture of hydrocarbons produced during the flash pyrolysis, or rapid heating, of biomass. Though not a real substitute for oil, Ecovolve is working on improving its quality and stability to make it useful for stationary power generation applications, which could allow it to tap into the existing diesel fuel market. 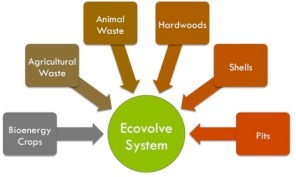 The company claims its systems are simple, customizable and cheap enough to be deployed in both developed and developing countries. Unlike other renewable energies, such as solar and wind, which are sporadic, pyrolysis provides a continuous, on-demand source of power.

Jason Aramburu, one of Ecovolve’s co-founders and its technology developer, told Biopact in an earlier interview that his firm’s systems typically convert around 20 percent of raw biomass by weight into the carbon-rich material, which is 85 – 95 percent pure carbon. Processing the biomass thus actually results in fewer emissions being produced than if it were left to combust naturally or decompose, Aramburu says. Because of its high carbon content, it also becomes a highly desirable fertilizer substitute.

Ecovolve’s real ace in the hole, Aramburu told me, is its reliance on distributed, or on-site, energy generation — the ability to produce electricity from many small energy sources very near to where it will be used. Right now, most countries generate their electricity in large centralized facilities — coal plants and nuclear plants, for example — which makes sense when you’re supplying the energy to large populations over long distances due to economies of scale. But what if you only need to supply power to a small village or community?

In that case, it probably doesn’t make sense to build a huge facility far away from where it is needed. Factor in the costs for transportation, infrastructure, pollution mitigation and for processing the biomass sources, and you’ve practically lost all the benefits of an economy of scale. A distributed energy system has the advantages of being more efficient, low maintenance, less carbon-intensive and, most importantly, cheaper. Processes can be automated and streamlined, reducing the need for an army of engineers and making it more likely that the plant will turn a profit.

By combining this model for energy production with a cheap, plentiful source of waste feedstocks and the production of a valuable by-product, Aramburu thinks his company may have a winning formula. While biochar is not currently considered a valid carbon sequestration technology under the Kyoto Protocol, Aramburu hopes its cheap production costs and other benefits will speed up its adoption and make it a candidate for inclusion under a future climate treaty’s CCS provisions.

The main obstacle blocking its rapid adoption and commercial-scale implementation is, ironically, also one of its main advantages: its small-scale. Indeed, though large, centralized facilities may not offer the same benefits as distributed energy projects, big utilities and other companies may reason that the argument for economies of scale trumps all others. They may also be reluctant to abandon, or reduce the use, of their existing facilities in favor of small plants, which would take time to localize and build.

Aramburu told me that Ecovolve’s plants are small enough that it can easy develop and test new pilot facilities in the field. His company is currently working with two sectors — small farming and wine production — to test out its systems and to integrate biochar into their value chain. Aramburu believes developing nations in Africa and Asia, which still lack an adequate energy infrastructure (and would therefore greatly benefit from distributed energy), could eventually constitute a significant share of his company’s business.

Its 25 kW systems seem to be sweet spot for local farmers, though it is also testing out a 50 kW version. While the biochar component of Ecovolve’s technology intrigues agriculturists, Aramburu said that they are a little wary since they are not sure how effective it will be over the long-term and if it will increase crop yields uniformly.

While biochar remains a niche market, there are a few other companies, including Vancouver, Canada-based Dynamotive, that are pursuing a two-pronged business strategy aimed at both selling biochar and producing renewable energy. In the U.S., companies like Madison, Wisconsin-based Best Energies and Littleton, Colorado-based Community Power, are also getting into the distributed energy game.

The one thing yet missing from the equation is a reliable source of funding. Aramburu said his company was still mainly focused on technology development, but that it would seek funding within the next 6 months to stage a large-scale demonstration of its system.

It eventually hopes to diversify into the small-scale (less than 0.5 MW) wind, hydro and nuclear markets as well. The company is also working on its business model and is considering some variant of direct equipment sales, leasing or profit-sharing. 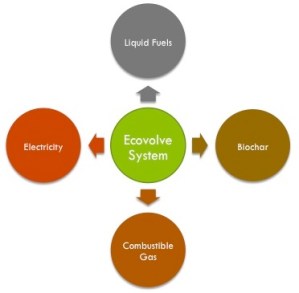