Sling Media, known primarily for the SlingBox, a device that can stream your home television signal to you anywhere in the world, is branching onto the web today with a limited beta release of Sling.com, a video portal that will let users not only watch premium and live video content, but also share clips of their favorite shows with friends.

Sling.com will give users access to a library of video content — movies, television and popular clips from 60 content partners — making it competitive with services like Hulu, Joost and Jadsters. What is unique, however, is the inclusion of PC-based SlingPlayer software that will let users watch their live or DVR’ed TV through the site (if they already own a SlingBox, that is), as well as an eventual Clip+Sling option that will let them record and share bits and pieces of video content with their friends through a social network.

Combined, these features might not be enough to make a serious run at popular YouTube, with its user-generated content, but Hulu and its ilk should sit up and take notice. The site isn’t fully baked yet. A select group of users received an invitation to a private beta yesterday, nearly two years after the company announced its intention to launch a portal. There will probably be several rounds of feedback before the site sees the full light of day. 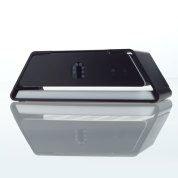 This is just one of several ideas the company has thrown at the public in the last couple weeks, the biggest of which is the SlingCatcher, a $300 device that will let viewers watch any video existing on the web on their living room televisions. They aren’t alone in this pursuit. Startup ZeeVee is marketing a set-top box that will deliver whatever is on your computer’s screen to any television, and the Digital Entertainer EVA8000 by Netgear will do largely the same. As of yet, the pricey Sling device doesn’t seem to differ. As a footnote to their other developments, Sling last week shipped its new SlingBox PRO-HD hardware, capable of catching and streaming HD programming.