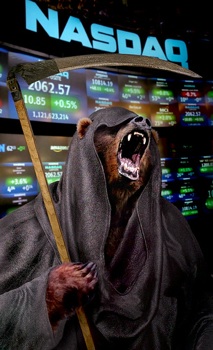 Some of the major tech stocks, which took massive hits on Monday, only to partially recover on Tuesday, fell one again. Two in particular, Apple and Yahoo hit new lows today, while Google didn’t fare much better.

How bad has Apple’s fall been? Just look at the chart below. It looks like the Mariana Trench. While Apple hovered around the $180-a-share mark for much of August, September was brutal on the company. Now October is turning out to be even worse so far.

Apple’s stock has not been at the $100-a-share level since late April/early May 2007. That was during a time of amazing growth for the stock. By the end of 2007 it had surpassed the $200-a-share level. A correction followed in early 2008, but the stock went back up shortly thereafter. Now, it appears in rough waters after several analyst downgrades. 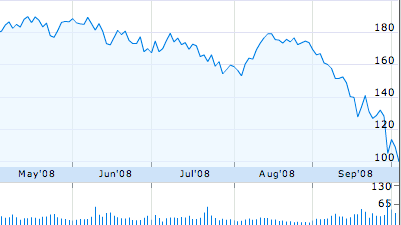 Another stock that fell in the 8 percent range today was Yahoo. It now stands at $15.58-a-share. The stock has not been this low since mid-2003 — yes, five years ago.

Yahoo’s market cap is now $21.59 billion. That’s significant because it’s almost exactly half of the $44.6 billion offer Microsoft made in the beginning of this year to buy the company, as AllThingsD’s Kara Swisher notes. It sounds like the perfect time for Microsoft (which fell much less than its tech counterparts in trading today) to swoop in for a half-off sale, right?

Wrong, say Microsoft sources close to Swisher. Microsoft chief executive Steve Ballmer was apparently so put off by the whole ordeal of trying to acquire Yahoo the first time around that he says he isn’t going to make an offer no matter what happens.

But as the saying goes: Never say never.

Everyone has a price, and Yahoo’s is getting cheaper by the day. If Microsoft is really serious about remaining relevant in the Internet game, it’s going to have to make a move for Yahoo sooner or later — no matter how Ballmer personally feels about it.