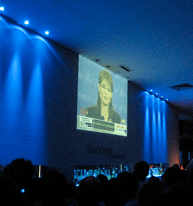 The buzz around Google Knol, the “Wikipedia killer,” has died since its unveiling in late July. Now, Google is attempting to revive interest in the site by launching Knol debates — op-ed style entries that feature the opinions of opposing experts and allow users to chime in.

While Knol has managed to assemble some good information, it’s been kind of hard to navigate, and since so many users already know, use and love Wikipedia, it’s been unclear what Knol really added.

Google more or less admits right off the bat that the reason it’s adding debates to Knol is to build off of the excitement surrounding the current political debates going on in the United States as we get ready to elect a new President. The search giant has also picked a very hot-button issue for the first debate: The economy.

That actually could be pretty interesting. A lot of people out there are looking for answers from “experts” as to what exactly is going as the stock market continues to drop and banks continue to collapse. Economists from the Cato Institute and the Economic Policy Institute at least have the background and perspective to write about the topic in a thoughtful and compelling way. Google is highlighting them for this debate.

Because Google is trying to make Knol more accountable than Wikipedia by requiring such things as user accounts if you want to write an article, a person might feel better reading about the current economy on Knol rather than Wikipedia. And the debates may serve to highlight that accountability … if people care enough to actually visit Knol.

Google is also encouraging the Knol community to get involved by responding to pieces written, writing comments on them and rating them. According to a Google blog post on the matter:

These experts are using Knol because they want to collaborate with readers, and they are committed to updating the articles based on your input.

So the experts are interested in crowd-sourcing their own takes on the issues? Maybe no one really does know what is currently going on with the economy.