The U.S. markets underwent a big rally during the first part of trading on Monday, perhaps a testament to newfound optimism in the plan by several countries to stabilize the banking sector. The Dow is up around 7 percent, over the 9,000 mark for the first time since falling below that mark last Thursday.

Update: The Dow and Nasdaq rallied much higher before the close of the market. Both ended the day with gains of over 11 percent. More on that at the bottom.

The tech-heavy Nasdaq is doing even better today. It’s up over 7.5 percent, surging past the 1,700 point mark. Since October 1, the Nasdaq had lost over 500 points, down also just about 25 percent.

Many big-name tech stocks are making big gains today. Sun Microsystems, whose stock has been hammered this year, is up over 12 percent. Microsoft, which had largely avoided some of the huge drops of some of its rivals, is up over 11 percent. Google is also up over 11 percent — its market cap now safely above the $100 billion line — and it’s once again the most valuable company in Silicon Valley (beating out Cisco Systems).

Computer-maker Dell is up over 11 percent as well. Another computer-maker, Apple, which is unveiling new laptops at an event tomorrow, is up over 8 percent — back above the $100-a-share mark. Yahoo is up over 6 percent.

Impressively, Sony’s stock is up over 15 percent right now.

In non-tech stocks, some notable gains were made by the two largest U.S. automakers, Ford and GM. Each had stock rising over 20 percent — with GM over 30 percent. But the big winner has to be Morgan Stanley. The financial company’s stock rocketed up nearly 70 percent after completing a deal for a $9 billion investment from Mitsubishi UFJ, a Japanese financial group.

While a number of factors have played into the market plunge in October, margin calls may have added a significant amount of pressure last week, The New York Times argues. As the stocks began to drop, many fund managers may have had to sell millions of dollars worth of stock in order to pay off the margins, borrowed money from banks.

But it’s undoubtedly foolish to think that all of the market’s issues are resolved thanks to a one-day rally. There is still a long way to go before all of the losses made just in the past week and a half are recouped — and that may not happen for awhile.

Some of the stocks mentioned above outpaced the big market surge. Sun Microsystems went up nearly 18 percent, Microsoft nearly 17 percent, Apple and Google both over 13 percent.

Morgan Stanley saw a massive 90.29 percent gain in its shares by the end of trading.

It was no doubt a great day for the market, but there is definitely still a fear which I think CNET writer Caroline McCarthy captures perfectly with a tweet (Twitter message):

This whole “disaster over!” thing reminds me of the scene in Jaws when they catch the tiger shark and think they’re all safe again. 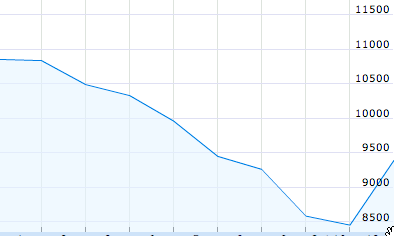