A new browser plugin called MashLogic launched in invite-only testing today, and it has a pretty lofty goal — in the words of David Cowan of Bessemer Venture Partners — which incubated the company — MashLogic is “a startup to save the web.” More concretely, the plugin can add useful links based on your interests, and block spammy links too.

The Internet has become “a big honkin’ billboard,” Cowan says, where hyperlinks on popular websites are all self-serving — they’re either paid links or links to other parts of the site. As a result, users have stopped trusting links, and use Google and other search engines as their primary tool for navigating between sites.

Now, I’m not completely on-board with Cowan’s analysis — you can find plenty of links on VentureBeat, for example, that don’t fall into the paid-link or self-link camps. But VentureBeat writers definitely think about these issues, and I certainly prefer linking a VentureBeat story rather than a competing site’s. Plus, I hope we’re one of the good guys; I’ve been to plenty of sites where the links are virtually useless.

Menlo Park, Calif.-based MashLogic tackles the problem by supplementing and replacing useless links with better ones. For example, users can tell the plugin to include links to Wikipedia entries or to LinkedIn profiles. A piece of text can link to multiple sites, which are previewed in a pop-up windows. MashLogic can also block ads, and it even provides a “nuclear option” of stripping all the existing links from the page. Overall, it’s a more user-oriented approach than something like Snap or Adaptive Blue‘s SmartLinks, which are installed by publishers. 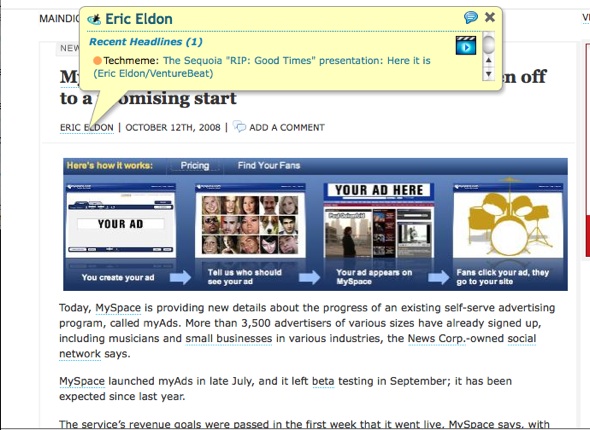 MashLogic does face some obstacles, since users have to download it. But the company will actually have an unlikely distribution partners — the publishers whose links it will potentially erase. That’s because publishers will can their own “mashes,” too. For example, we could create a VentureBeat mash. Once our fans (I know you’re out there) downloaded the mash, it would add links to relevant VentureBeat articles from anywhere on the web. Even if they’re unhappy about what MashLogic is doing to their own links, publishers will have a real incentive to push those mashes onto their readers, unless they want to be left behind by the competition.

So it’s a smart approach to a real problem, but can it make money? That seems like a particularly big challenge now, when consumers and businesses are cutting back their spending. Cowan says the main business opportunity comes from charging affiliate fees for MashLogic links that go to ecommerce sites.

“If we’re successful, all that [search] traffic will instead flow through MashLogic links,” he says. “Then all the people who want that traffic should be interested in helping to pay us.”

Cowan also says that Bessemer is in this for “the long haul.” It helps that with just a small team of engineers — everything else is handled by Bessemer staff — MashLogic is burning through cash pretty slowly. The venture firm has also backed MashLogic for less than $1 million, Cowan says.

Update: We now have got 100 MashLogic invites for VentureBeat readers.