The New York Times continues to redefine the role of a big newspaper with today’s release of its first application programming interface (API). Using the Campaign Finance API, developers will be able to incorporate data about who donated to which presidential candidate — the same data used to build The Times’ campaign finance map (pictured below)– into their own applications. Coming up next will be an API to access The Times’ movie reviews.

Releasing APIs is yet another forward-thinking idea from a newspaper that has been quite smart in its embrace of the web, and I’m not just saying that because The Times syndicates some of our posts. The Times has perhaps the best-designed and most-popular newspaper website around. (Of course, with the newspaper industry struggling and The Times’ own earnings at a less-than-stellar level, the newspaper company is facing an “innovate or die” moment.)

The Times has also been aggressive in pushing beyond that website, with applications for social networking site Facebook, the iPhone and hybrid web/desktop platform Adobe AIR. Still, those are all basically channels to distribute The Times’ articles. APIs take things a step further, because they allow developers to determine how data gets presented. 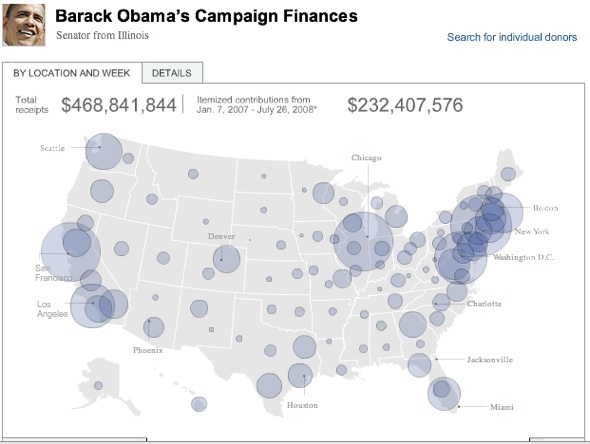 This is an important step for the survival of big media companies, says ReadWriteWeb’s Marshall Kirkpatrick. He argues that reporting is becoming less of a scarce commodity, so the future value of the Times and similar companies lies in their “information processing resources and archival content.” While I hope Kirkpatrick is wrong about reporting, he’s definitely onto something. One of the big parts of The Times’ abortive Times Select initiative was making readers pay for archival content — a payment that I, for one, was happy to make. Times Select didn’t work out, but there’s untapped value in the archives.

The question, of course, is the same question facing the newspaper industry — how to turn that value as into money. It’s not clear how the APIs will do that; the terms of use say The Times could charge for the data in the future, but it isn’t doing so yet.

Hopefully the money side can be worked out, because it would be very exciting to see journalistic data and content powering a wave of new web apps. The Campaign Finance API is pretty cool idea in and of itelf, by the way. Sure, all of the data comes from public documents, but The Times has the resources to really make that data accesible and comprehensible to the public. Analyzing campaign finance data can reveal a lot about how governmental decisions get made, so the more transparent the donations become, the better.