Personal finance site Mint.com is making its investment management tools available to all of its users after months of invite-only testing.

Now may seem like an odd time to add these features — yesterday’s market rally aside, this isn’t exactly a great period for the stock market. But the turmoil only makes it more crucial for users to see all of their investment data (and more) in one place, says chief executive Aaron Patzer, so they know exactly what’s happening with their finances. In fact, Patzer says Mint.com’s traffic has doubled since the financial crisis started.

The new feature allows you to add your brokerage, mutual fund, IRA, 401k and other accounts to your Mint.com account. Patzer took me for a quick tour of how the site manages his own investments, and I was quite impressed. Mint.com already does a good job of letting you navigate checking, savings and credit card data, and its investment side is just as smartly designed.

The site allows you to see the big picture of how all your investments are performing, but also to get as detailed as you want. For example, you can see how each category of your investments is doing, then drill down to a specific account and see how it has performed over time against the stock market. For accounts like 401ks, Mint.com can also factor in your “cost basis” — in other words, it can show you if the account is just gaining value because you keep putting more money into it, or if the investments are actually paying off. 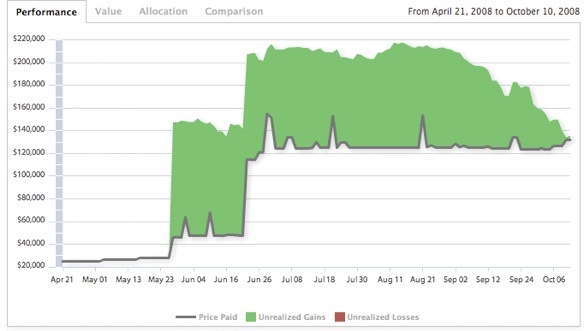 One of the cooler features is Mint.com’s ability to detect if a 401k account comes from an old employer. Mint.com alerts you about those accounts, and lets you calculate how much money you might save by moving the money into a Rollover IRA.

Mint.com added its 500,000th user this week, and Patzer says investment tracking (which isn’t offered by competing personal finance sites like Wesabe and Geezeo) should help the site target an older, more financially sophisticated audience. [Update: Actually, Geezeo added investment tracking in 2007.] It’s too early to say how successful this strategy will be, but there are some positive signs. Even with the investment tools in private testing, with a few features already rolled out to all Mint.com users, the site is already handling $8 billion of investments, he says. That beats the few numbers that we’ve obtained about sites like Cake Financial and Covestor, which combine investing with social tools.

Of course, the new features would be even more useful if they allowed you to do actual trading. Patzer says that’s a long-term possibility. For now, however, he says Mint.com is focused on other goals, with a new SMS text messaging feature set to be announced in two weeks, and an iPhone application coming soon too.