TestFreaks, a product review site that says it’s growing steadily, has raised $3 million in a second round of funding.

There’s a lot of competition out there — for example, we’ve covered Retrevo, which sifts through all the information online about consumer electronics, and Buzzillions, which aggregates consumer reviews. But Kristofer Arvin, the Stockholm, Sweden-based company’s founder, says TestFreaks stands out because of the sheer number of reviews it aggregates. The site pulls data from more than 4,000 sources in more than 60 companies. Then it crunches all those reviews together into what it calls a “Freak Score,” which is basically the average rating for a product.

“Our ambition is to make this page the best page on the web about this product,” Arvin says.

He also points to the fact that TestFreaks lets you drill down to “local” reviews, which are the most relevant to users — after all, someone in the United States may not care how a gadget was reviewed in Japan. 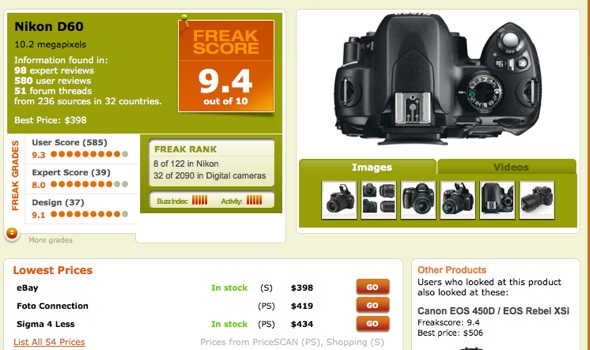 TestFreaks’ business model is interesting — instead of competing directly with comparison shopping engines like Shopping.com, it aggregates prices from comparison shopping sites and takes a cut when users make purchases at those sites. That model ties into TestFreaks’ ambition to be the central hub of reviews and shopping, but it may also add too many layers and complications to the process.

For now, though, TestFreaks is growing at a healthily clip — traffic has been doubling every three months, with about 2 million visits per month currently, Arvin says.

The new funding comes from Northzone Ventures, which also provided the company’s $3 million first round.