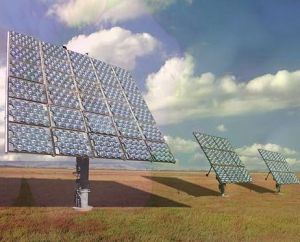 Investing $103 million in a new technology is no small vote of confidence. Yet that’s how much a Spanish company called EPME Solar is putting into concentrating photovoltaic (CPV) panels from SolFocus.

CPVs a type of solar power in which sunlight is focused by lenses or mirrors onto a small, highly efficient solar cell. Although other forms of solar power — notably solar thermal, in which focused sunlight turns water to steam — have landed deals running into the billions of dollars, this is the biggest single investment that CPV has received to date, by a significant margin. The technology is typically considered less proven than solar thermal and regular solar panels.

SolFocus is probably the biggest CPV player, but the deal should give a confidence boost to a bevy of other startups working on CPV, including Cool Earth Solar, Greenvolts and Sunrgi. The biggest reason that CPV panels haven’t been deployed in large numbers yet is that the cost benefits they offer over regular solar panels don’t yet outweigh the caution of investors, who lack examples of large CPV installations that have turned a profit.

However, the technology is rapidly advancing in a way that silicon-based solar cells are not. The first generation of SolFocus panels got about 18 percent efficiency, which is around what a premium solar cell would get. The panels the company will install in southern Spain, though, are a second generation product with higher efficiency.

Because SolFocus hasn’t yet officially announced that second-generation technology yet, the company isn’t disclosing what its efficiency will be. However, the numbers the company released on the planned Spanish installation suggest that the panels will operate at about 25 percent efficiency, a large boost over what traditional mass-market panels can achieve, and likely a significant factor in lowering the cost of solar power.

The concentrating panels will also withstand the high temperatures and plentiful sunlight native to such areas as Arizona and California’s deserts, better than silicon panels, according to Nancy Hartsoch, the company’s vice president of marketing. Some initial testing and certifications are beginning to make buyers comfortable that CPV will be good for the 25 year lifetime that’s standard for most solar panels.

The one note of caution here is that there will probably be relatively few deals of similar size to this one, which will provide about 10 megawatts of power, enough for 40,000 homes in the area. Spain offers attractive perks for solar power that aren’t matched elsewhere. The typical CPV installation will thus be dozens of panels in one place, taking care of the power needs of a single business or organization, rather than thousands grouped together to sell power into the electrical grid. Still, this is a major first step for seeing the technology become a big renewable energy player.