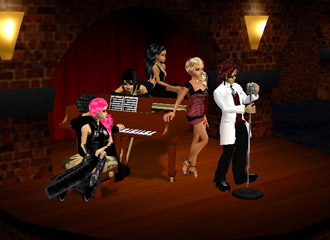 In a sign that the music industry is embracing the digital age, IMVU is announcing today that it will let users discover, share and buy music inside the virtual chat rooms of its 3-D social network.

IMVU lets members create their own 3-D animated virtual characters, or avatars, and decorate rooms that serve as 3-D chat rooms. Now the members can use IMVU Music to buy songs, create playlists, and listen them alongside other IMVU avatars. In essence, it recreates a kind of “listening bar” social experience that allows users to talk about the music — or even dance to it — with a group of friends as they hear it, said Cary Rosenzweig, chief executive of Palo Alto, Calif.-based IMVU. More than a million songs are available.

“Instead of being passive recipients of music, people can now be the DJs,” Rosenzweig said. “They can share the music they want, like going over to a friend’s house to share CDs.”

This is just the kind of extension of the music business into the social realm that MySpace co-founder Chris DeWolfe and Warner Music Group chief Edgar Bronfman Jr. were talking about last week at the Web 2.0 Summit as the key to saving the music industry from piracy. The entire music industry will watch this closely since it is banking that the discovery of new music in a social setting will directly lead to an increase in music consumption and purchases.

This is also a good way for IMVU to distinguish itself from other sites that offer virtual chat rooms — Vivaty, Whirled, Lively by Google, Gaia Online, Habbo — and the larger virtual worlds such as Second Life.

Rosenzweig said that the company responded to requests from members who wanted to have their 3-D virtual rooms come to life, like real world apartments or homes with mood music. Users can listen to music in private rooms or public spaces. Users can listen to streams of music or purchase downloads that are free of digital rights management from a big catalog of music from all four major music labels.

Notably, users must pay for the music. If you’re visiting a room owned by someone else, you don’t have to pay. The virtual room itself is free for the owner to create. But to stream a song inside the room, the owner of the room has to pay for the song one time.

Using IMVU’s currency, they pay 990 credits for streaming rights. That means you can stream the songs in your room and play them for those who visit your room. About 1,000 credits costs $1 in real world money, so the songs cost just as much as they do for most music on Apple’s iTunes. For DRM-free rights, the cost is 2,200 credits. Besides buying credits, users can also generate credits by creating virtual goods that other members buy.

The users can listen to those songs within IMVU or move them to their iPods and other digital music players. Songs are available from the majors — EMI, Sony BMG, Warner and Universal — as well as music distributors including IODA, Redeye, GetUPlayed, Tunecore, Iris, Song and the top artists from CDBaby. That latter group means that independent artists such as Liam Finn and Danielson Famile can get exposure on IMVU. 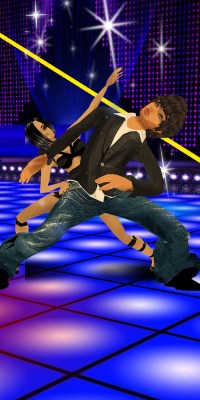 Rosenzweig said the company has been testing music sales for some time and is now generating sales of thousands of songs per day, forcing the company’s hosting partners to add new servers. The company is also inviting members to create their own songs and upload the music for sale on IMVU.

IMVU has added more than 25 million registered users since opening its doors four years ago. There are 10 million unique visitors a month, as measured internally through Google Analytics. Despite the tough economy, Rosenzweig said that October was a strong month, partly because the company’s fortunes aren’t tied to ads. Virtual good sales account for more than 90 percent of revenues. At any given time, 60,000 users are online at IMVU.

The company says it is generating $1 million a month in revenue through micro-payments, or the sale of the virtual goods, such as clothing or room decorations, that are created by members. The company has more than 100,000 registered developers, who have made more than 1.8 million items.

IMVU is backed by venture investors Menlo Ventures, Allegis Capital and Bridgescale Partners. It has 55 employees.