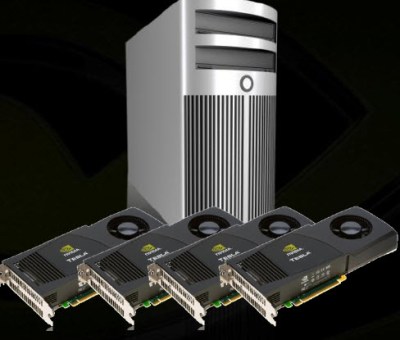 As Nvidia’s graphics chips are enlisted to handle computational tasks in supercomputers, the chip maker is finding there is a new class of machines emerging: the personal supercomputer.

Scientists have been using workstations for years to make calculations or share a slice of a multimillion-dollar supercomputer. But Nvidia says that the era of personal supercomputing has arrived for scientists who need to conduct experiments on their own in a timely manner. By adding graphics processors to machines that have only had microprocessors in the past, scientists can speed up their calculations; 3-D ultrasounds can be done 20 times faster, while financial simulations can be done 149 times faster. In computational chemistry, one task that took 4.6 days can now be done in 27 minutes.

Vivoli said that the company was finding that scientists were cobbling together their own supercomputers in their offices to supplement their access to supercomputing resources (see picture below).  Nvidia’s newest Tesla graphics processing units (GPUs) are aimed both at this emerging market and at the supercomputing clusters that use hundreds of machines. Scientists may find the new personal supercomputers with the Nvidia Tesla S1070 chips appealing because they won’t have to wait for their share of a big supercomputer’s computing resource. 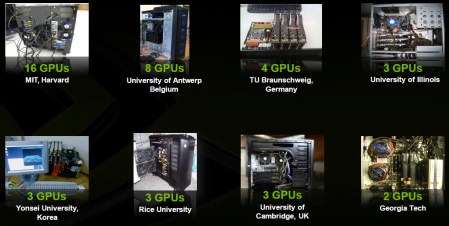 The new products are expected to find a welcome reception because graphics chips can be far more efficient at certain kinds of processing. To date, most supercomputers consist of collections of central processing units (CPUs) such as those made by Intel and Advanced Micro Devices. But with the launch of its CUDA programming language, Nvidia has made it possible to run general-purpose programs on GPUs. Since GPUs process in a highly parallel fashion, while CPUs work serially, different kinds of tasks can be done more quickly on GPUs. That has opened up new opportunities for graphics chip makers.

Dan Vivoli, senior vice president of marketing at Santa Clara, Calif.-based Nvidia, said that these new personal supercomputers have the computing power of a small cluster at 1/100th the price. And they come in a smaller form the size of a standard desktop workstation. These machines have 250 times the processing power of a conventional workstation.

Intel, of course, may not like this idea, as it means a supercomputer will have fewer CPUs and more GPUs. But the architecture has the support of Burton Smith, a technical fellow at Microsoft. The combination of CPUs and GPUs is what makes such a breakthrough possible, he said. The personal supercomputers also got an endorsement from Jack Dongarra, director of the Innovative Computing Laboratory at the University of Tennessee.

A number of universities are already using personal supercomputers equipped with GPUs, including MIT, the Max Planck Institute, University of Illinois at Urbana-Champaign, Cambridge University, and others. AMD has its own offerings in this space, including a board launched last week. Nvidia, for its part, uses the new Tesla C1070 GPU processor. There are 28 supercomputer/workstation makers using the Nvidia GPU, including Dell, Lenovo, and Asus, and Nvidia estimates there are 15 million scientists and students who could use the personal supercomputers.

The chip is also being used in high-end supercomputer clusters. One of the first GPU-based supercomputers to break into the world’s top 500 most-powerful supercomputers is a Tesla-powered machine from the Tokyo Institute of Technology. The institute’s Tsubame supercomputer will use more than 170 Tesla S1070 chips.