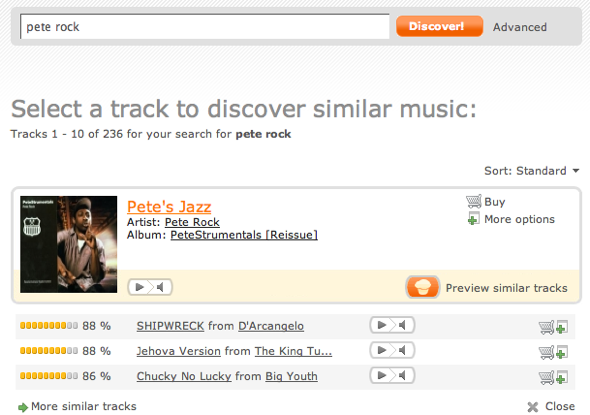 Mufin, an automated music recommendation service, has publicly launched today. The Berlin-based company has been getting some positive reviews because of its technology, built by the Fraunhofer Institute, the German research organization that created the MP3 music file format. It uses an algorithm to parse more than 40 different aspects of music, like the rhythm structure of a song, or its tempo.

To use the service, you search for a song on Mufin’s home site, or on its MySpace or Facebook applications. Then you can listen to a short clip of the song and to clips of other songs it recommends. The home site lets you create playlists of these clips, although I have to say, these are not especially enjoyable to listen to, given that you’re only hearing about 30 seconds of each song.

The company has more than 4 million songs in its library, across a range of genres. There’s also an iTunes plugin (currently Windows only) that gives you recommended playlists drawn from your library, based on what you’re listening to.

The company is also licensing its technology to third parties. There are four licenses available, that it is announcing today:

A long list of high-quality and established rivals offer more user-friendly music recommendation services. Pandora is my favorite: It recommends songs similar to ones you pick, based on a set of characteristics as determined by hired music experts and its own technology. Pandora’s interface, due to its “internet radio” licensing deals, lets you listen to entire songs — and, in fact, entire “stations” of similar songs. Also, Pandora has an amazing app for the iPhone that lets you listen to your stations on the go.

I tested Mufin by searching for one of my favorite hip hop producers, Pete Rock (see screenshot), and I got recommendations for dub reggae. I suppose that’s a related genre, but Pandora already has songs in both genres figured out much more precisely.

Meanwhile, iTunes offers its own music-matching service, the Genius Bar. It uses meta-data about songs, like artist and genre names, but it’s also useful — and comes pre-installed for every iTunes user.

Mufin’s matching technology may be good or better than Pandora’s or iTunes in some instances, but it needs to get the music licensing figured out that would allow it to offer full tracks. Music listeners, after all, want to listen to music.

The licensing option may turn out to be the way for the company to go – especially if a licensing partner can help out with full-song licensing.

Mufin is a wholly-owned subsidiary of Magix AG.