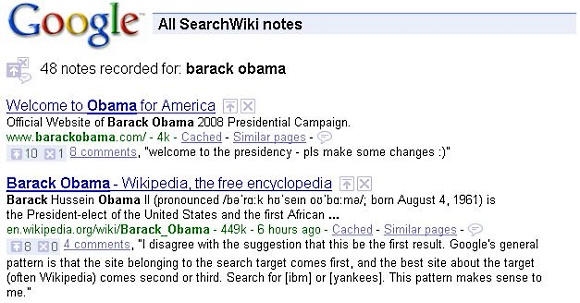 Google has released a new feature called SearchWiki that allows users to vote search results up or down, remove them entirely, or leave notes with their thoughts. While the rankings appear to only affect the account of the user who made them (for now), the notes are public and readable by anyone, and seem to already be in use for discussions (see above).

This move appears to have caught most users by surprise, though that reaction, in itself, should be no surprise. Google has become known over the past decade for a strong reliance on automated technology and an almost obsessive need to control its search results. Google, one might say, isn’t known for its human touch — although Google’s VP of search, Marissa Meyer, did foreshadow this release to VentureBeat contributor Doug Sherrets several months ago.

But if one were to rewind a few years and take a poll of techies on what sort of major changes Google might make, a popular answer would be the integration of semantic or natural language technology — which might provide a further step toward machine understanding of text. Yet while semantic web applications have flourished, Google has steadfastly refused to dilute its statistics-based engine with semantic tech, even while staying a step ahead of the competition with small innovations like OneBox results.

Comments I’ve heard from search startups that hope to chip away at Google’s lead suggest that, while they have been frustrated so far in attempts to outdo the giant, many believed that Google was too set in its ways to make any serious changes. This release suggests otherwise.

Although Google hasn’t indicated whether it will allow user rankings to affect its base algorithm, the likely answer seems to be “yes.” And if that’s the case, it could also spell the end for efforts like Search Wikia, Wikipedia co-founder Jimmy Wales’ attempt at building an open-source, community-driven search engine.