19 year old commits suicide on Justin.tv — The young man overdosed on pills while streaming live. People watching apparently weren’t sure if it was serious or not, but once they were, they alerted the police. By then it was too late. NewTeeVee has the full story. 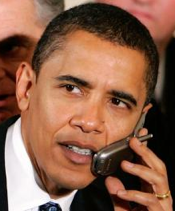 Obama’s personal cellphone records hacked — The President-elect’s cell phone account with Verizon Wireless was improperly accessed by some employees. It was simply a regular phone and not a smart phone, so no emails were seen, likely just a list of incoming and outgoing numbers. Verizon has issued an apology and put all the employees involved on immediate leave. GigaOM has more.

Sezmi lays off 20 percent of its staff — The company that had hoped to reinvent television now will have to reinvent itself. The New York Times has more.

Apple TV 2.3 firmware update — Apple has updated the firmware for its set-top box. While it adds the ability to use third-party remote controls (nice), it destroys previously installed Boxee support (not nice). AppleInsider has more.

CES feeling the economic burn — The Consumer Electronics Show is normally an engagement that gets larger every year, but this year several larger companies including Cisco, Yahoo, Seagate, Logitech and others are scaling back their involvement. Crave has more.

Apple’s stock now at pre-iPhone levels — The iPhone has been one of the biggest tech success stories in recent years, but even the company behind it can’t avoid the stock market woes.

Apple’s stock is below $85 a share for the first time since early 2007 when the iPhone was first unveiled. It had been over $200 a share during late 2007. MarketWatch has more.

YouTube in HD — While the online video site is still sticking with lower resolution videos as the norm for now, appending “$fmt=22” to the end of a videos URL will give it to you in 720p resolution, which is technically high definition. Wired has more and CNET has a good before and after example as well.

BitGravity brings an emcompassing HD picture — The content delivery network has a new product called Multiview, which shows six synced up high-definition video streams at once. You can easily switch which one is the focus by clicking on it. As TechCrunch notes, this would be awesome for sports broadcasts.