Power.com, the latest company that wants to bring you social networking Nirvana by letting you update all your profiles from a single place, launches this evening.

However, it needs a bit of work before it’s truly convincing. It has some bugs, and has the air of being rushed.

But it’s goal is noble. For a while now, the problem of having multiple profiles has plagued users. You may use Facebook regularly, but you may also have a MySpace account where you interact with certain friends, and you may use Gtalk to IM with still others. What do you do when you say, want to send a message out to friends across the networks? Well, you resort to a lot of cut and pasting. A pain.

More than a handful of companies have tried to bring a “aggregation” solution to this problem, but almost all have been unable to break through to mass adoption. There’s FriendFeed, that lets you share what you’re doing on various web sites, within a single interface. It’s popular among Silicon Valley’s technology community, but has yet to really break out to a wider user base. There’s a host of others, including Socialthing, recently bought by AOL; Plaxo, bought by Comcast; Strands, Spokeo, Profilelinker, and so on. A number of other companies, such as Orgoo, want to let you message pretty much any way you want, such as with IM, email, SMS or video chat. But even these haven’t done too well, in part because Google and others are starting to let you do pretty much the same thing from one place.

However, Power.com, based in Rio de Janeiro, Brazil, says it brings something new to the table by being able to synchronize your profiles and messages much more easily — by not forcing you to use a third site. You can use Power.com to update any of the existing networks you use — and it does so in bi-directional way. If you update your profile in one place, say on Facebook, it updates your profile elsewhere, for example on Hi5, and vice versa. While FriendFeed is a repository of what you do at other sites, Power.com lets you update your profile from its own site or at any other site. Same with messages: You can message anywhere from anywhere, and in any format. Or at least that’s the vision.

To begin with, Power.com’s actual launch offering is more limited. In the U.S. it lets you synchronize with MySpace, Facebook, Google, MSN, and Hi5. It will soon launch syncing with other services, including LinkedIn and Twitter. It will also soon let you sign in with your mobile phone number.

However, here’s the caveat: To begin using its service, it forces you to sign into all of your networks from a single page at Power.com. (Screenshot of the login page is below.) In this way, it is like the IM aggregator Meebo. Meebo lets you sign into all the IM services you want to use, and lets you do so from a single Web page.

Power.com has been surprisingly secretive to date. It has worked in stealth for two years, and says 5 million people have registered to use it. Some 500,000 visitors come each day, with 300,000 of them coming to Power.com directly to use as their start page. That’s serious usage for a company that hasn’t officially launched. It has remained quiet by focusing mainly on Orkut (Google’s social network) users, the bulk of whom reside in Brazil and India. The viral growth has come from promotions the company uses, for example it provides a link to Power.com each time a user messages a friend using the service.

The company has a whopping 70 employees, and has eaten through about $8 million in funding over the last year, $6 million of which came from Silicon Valley’s venture firm Draper Fisher Jurvetson. Founder Steve Vachani, who previously was chief executive of direct marketing company Qool Media, gave me a demo of the service this morning. 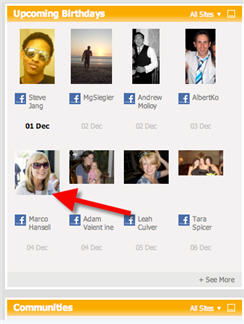 The company does have an air of rush to it. Only last week did it expand from its Orkut base to let users sync with their Facebook, MySpace and MSN accounts. That may be because the downturn is forcing it to move with more urgency. Vachani said the company is looking to raise its second round of venture capital, and that the public launch is designed to prove its viability. But there are other bugs that show its not ready for primetime. For example, in its “Upcoming Birthdays” feature, none of the people or the birthdays are actually accurate (see left). Vachani tells me this is a bug that is being fixed.

The company has me torn in two. There’s part of me that says it’s tried diligently to think through every instance of how you’d update a profile or message from within a profile and makes it extremely easily to synchronize it all — with all the right cues and options. For instance, you’ll be able to update an application on MySpace, and Power will update that application via the OpenSocial protocol so that the changes are reflected on apps on your other networks.

There’s no doubt it is on to something. The company says it is the first to introduce “social internetworking,” which it defines as “your social network, email, instant messenger, and mobile phone accounts, content and contacts always synchronized, interoperable and connected together.”

However, there’s another side of me that is skeptical, that thinks it is overkill and has so many features that it’s way too confusing for regular users to adapt to it quickly. In this way, it reminds me of Blue Lithium’s effort last year to launch a social network called MingleNow — that effort took months as the MingleNow engineers thought through every possible scenario you could use a network, and it ended up going out of business because it simply did too much.

Still, it’s true that no one else has succeeded in making social internetworking super simple. Here are the competing efforts to Power.com:

1) The big social networks are walled gardens, but they’re trying to open, with things like Facebook Connect, Google Connect and Microsoft Passport — letting you sign on to other services with your existing login info. However, these services all keep the major networks at the center, and people must log into those central networks to do anything.

2) Shared gates between gardens: OpenSocial, OpenID. Downside: Microsoft and Facebook never joined OpenSocial. To agree to the common standards in OpenSocial, applications have to agree to lowest denominator functionality, which limits their use.

3) Third parties that build on top of the gardens: Trillium and Meebo for IM, Web 2.0 mashups. However, these services are based on APIs, and they are one-directional. Other services, such as FriendFeed and Plaxo are able to access their data only via APIs and feeds.

Separately, Power.com lets you mix up all your data into a new experience. It uses a programming language called Powerscript. For now, it’s controlling that mashup experience, offering specific modules at its home page. Later, however, it will release an API for developers to build on it. It isn’t saying too much about that for now. But, it says it isn’t transgressing the terms of service of Facebook or others, because it doesn’t copy or move any content out of Facebook: “We are passing through their site and content dynamically. We have seen Digsby doing some of these things for a while,” says Vachani. He says Google has been aware of Power.com’s use of Orkut data for a year and hasn’t complained.

One cool feature is that it lets you browse your friends from a central place, wherever they may reside, and lets you add them to your IM client contact list without you having to cut and paste anything or even be conscious what IM service you’re using. Power.com takes care of the protocol connection quietly on the back end.

Its browser functionality keeps you at a Power.com URL even while you surf your favorite default site — the only difference is that gives you a way to peer across the other networks by letting message or communicate with people who have profiles on other pages.

My advice to try it out and see what you think. It could be quite powerful for some users willing to experiment with it. For some users, it could be simpler than using FriendFeed.

In summary, here are the main features it offers right now:

–Enjoy all your friends from your Facebook, Myspace, Google, MSN, and other sites, brought together on Power.com
–Read and respond to your messages from all your sites in one place at Power.com
–Enter and browse all your social network, email, and IM accounts simultaneously with one login at Power.com
–Use MSN Messenger inside your Facebook, Myspace, Hi5, and Orkut at Power.com (Yahoo Messenger, Gtalk, and AOL Instant Messenger coming soon)
–Send messages, photos, and videos to multiple friends simultaneously on all your sites, email, and IM from Power.com
–Access Facebook, Orkut, Hi5, or Myspace from blocked computers at work or school through Power.com
–Interact with with users from all social networks around the world in Power.com chat rooms
–Use Hotmail, Gmail, Yahoo Mail, Facebook Mail, and work email together in one place at Power.com (coming soon)
–Synchronize and manage all your photos, music, applications, blogs, and videos on all sites at Power.com (coming soon)
–Add LinkedIn, Twitter, Flickr, Yahoo, Hotmail, Gmail, AOL, Blogger, and Skype to your Power.com start page (coming soon)