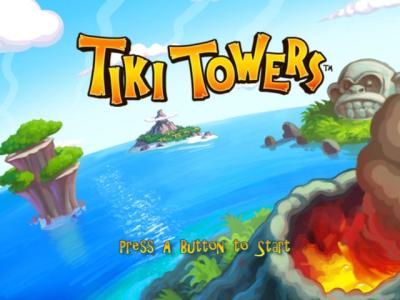 Real Networks is moving into cross-platform mobile games as it diversifies from its focus on PC-based titles.

The first cross-platform game is Tiki Towers, where the player builds bamboo bridges so that a gang of monkeys can cross over gaps and obstacles. It is out now on mobile phones and will be available on the iPhone and iPod Touch [on Dec. 15]. A WiiWare version is available for download starting Dec. 22.

The game represents an interesting maneuver for one of the older casual games companies in the industry as it struggles to deal with a huge influx of new game companies dumping a lot of titles on the web for new crops of players who don’t play hardcore games on consoles. It also reinforces our earlier report about how important the iPhone and iPod Touch are becoming in reaching new audiences. 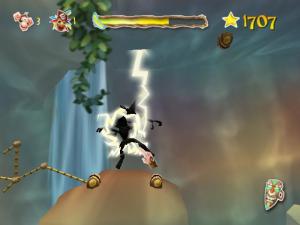 My 12-year-old and I have been playing the beta test of the iPod Touch version of Tiki Towers for a while. It’s a cute game where you help the monkeys get to a safe place following their plane crash by building bridges out of bamboo, vines, and coconuts. Building the bamboo bridges sounds easier than it is, as the bridges sag and break under the weight of five monkeys crossing it. Not only do you have to get the monkeys from one place to another; you have to get them to grab the bananas hanging in various high spots, such as over lava pits. You can play it in single-player or two-player cooperative mode.

Real Networks just laid off 130 of its employees. It’s been planning to spin out its game division for some time. It launched its Real Games downloadable PC game division in 2001 and bought developer Game House in 2003. Now the plan is to go where the gamers are on other platforms, said Sean Amann, general manager of sales and marketing. At Real, which built its business on music and video, games are increasingly important. The overall company reported a loss of $4.5 million in the third quarter, compared to a profit last year of $4.3 million. Revenues were up 5 percent to $152 million. But game revenues jumped 19 percent to $34.2 million.

This quarter, the company is launching about 20 casual games — those played by mass market consumers rather than hardcore gamers — for a number of platforms, including the Nintendo Wii, Nintendo DS, PC, mobile, iPhone and iPod Touch. Six titles are debuting this quarter on the iPhone. 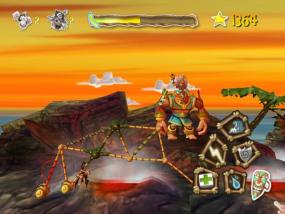 While the company is shooting for simultaneous releases on multiple platforms, (starting with Tiki Towers), it is creating unique versions that take advantage of the features of each platform. The iPhone/iPod Touch versions of Tiki Towers take advantage of the touch screen. While that’s a no-brainer, it isn’t perfectly executed. You basically use your finger to add a piece of bamboo to a bridge. But the bamboo sticks are so small it’s hard to precisely direct where you want the bamboo placed. That’s not a good thing for players who are all thumbs.

You help the monkeys get across ravines, lava pits, mystery islands, and jagged mountains — sometimes in dangerously high winds. The iPhone and iPod Touch version of this game is far superior to the mobile phone version which doesn’t use a touch screen.

Amann said that the company felt Tiki Towers would work well because of the fun building mechanic and the appeal of monkeys across a lot of generational and gender groups. Moving forward, the company will release more and more titles simultaneously on a bunch of platforms. Back in October, Real Networks announced it was moving onto the Wii, via the downloadable WiiWare platform, with the launch of the game Boingz. 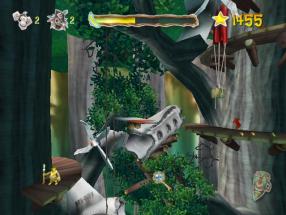 Clearly, one of the big problems for Real Networks is that the market is getting crowded and casual games are becoming commoditized. In the past, the try-before-you-buy model worked pretty well. Players would download a demo, play it for an hour, and then decide whether to pay $20 to unlock the full game. Maybe one percent of players did that, enough to generate steady revenues.

But now there’s serious competition from a plethora of free web games. Real Networks is trying to get around that with the cross-platform approach, Amann said. But everywhere it goes, Real Networks will run into competition. On the iPhone, Ngmoco is a serious player. But there are thousands of games available on the iPhone already, ranging from free games to $9.99 applications. 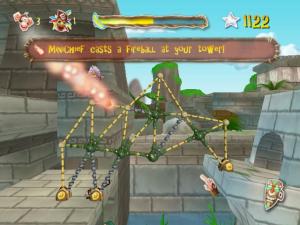