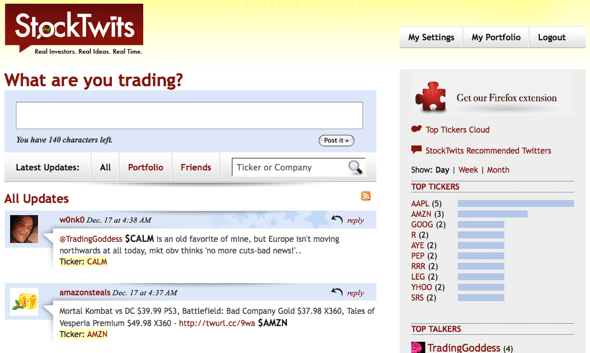 StockTwits, a two month-old site that lets you track messages on micro-blogging service Twitter about public company stock performance, has closed a first round of venture funding. The investors, all individuals, are a wide range of Twitter-loving finance types who have become addicted to the service.

Basically, StockTwits is a sort of social hub for people who want the most up-to-date information on the stock market. You sign up for the site, and any tweet (a Twitter message) that you send out will show up on the site’s homepage, provided the tweet has a dollar sign next to a stock symbol. So if you were to tweet “I think you fools are undervaluing $AAPL,” that message will show up on the homepage and all the other StockTwit users will see it. They can respond and start following you on Twitter — if you’re good, they might tell their Twitter followers to follow you as well. This way, the site serves a clearinghouse for sharing news articles, investment strategies and other helpful information.

The site encourages community participation through features showing the top stocks, the most talkative users, and the fastest gaining or losing stocks of the day. 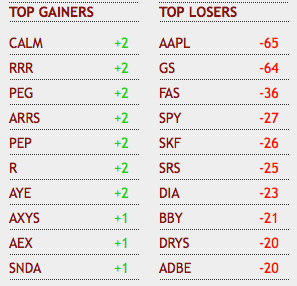 In this way, the site has quickly showcased rising talent among stock pickers. One is Gregor MacDonald (@GregorMacDonald), who became a StockTwits favorite after making calls on energy stocks ahead of the rest of Wall Street.

Conceptually, StockTwits is a very smart way to build a pragmatically-focused community within the freewheeling mass of Twitter users — you won’t see tweets about what another StockTwits user had for breakfast. Other efforts in this direction tend to be more general, like hashtags; that service lets you view tweets that include a particular tag, such as #photography. StockTwits also includes a browser extension for Firefox that highlights StockTwits tweets within your general Twitter stream. As Twitter grows, expect to see more of these sorts of filtering and community-driven services built on top of it.

StockTwits is still small. It has more than five thousand Twitter users signed up, with around 400 actively participating contributors and roughly 250,00 pageviews per month, the company says. This seems miniscule by the usual measures of web traffic, where significant services count their user bases in the millions. The difference is that StockTwits users are active investors, some of whom are highly regarded on Wall Street. This service gives them a potential edge over non-Twittering, non-StockTwitting rivals. As a result, financial news services like Bloomberg are looking to integrate with it.

Here’s the list of investors in this round; it was led by IA Capital Partners, LLC, the investment vehicle of Roger Ehrenberg.