I know I’m not the only one who’s made my email account the center of my life — it’s where I store most of my documents, contacts, and pretty much everything else — but finding things is still hard. There’s just too much stuff in my inbox, which means I waste lots of time digging through dozens of emails to find a specific link, an important document, or just figure out which messages are urgent. The founders of a new startup called Postbox say they have the solution. I’ve been playing with the software over the holidays, and they’re definitely on to something.

The team launched the product at the TechCrunch50 conference, and at the time, VentureBeat writer Chris Morrison wondered if Postbox could stand out against a long list of competing desktop email software — Zimbra, Xoopit, Xobni, and more, not to mention more established products like Microsoft’s Outlook and Mozilla’s Thunderbird. At least the San Francisco startup has some experience in the field: Cofounder Scott MacGregor was on the team that created Thunderbird, and chief executive Sherman Dickman also worked at Mozilla. It’s still too early to say whether Postbox will take off, since the service just launched its invite-only beta test (you can get in line at the company website). But Postbox has already tempted me away from Thunderbird, which I was using as a Gmail backup, and it’s starting to chip away at my loyalty to Gmail itself.

Postbox doesn’t offer a single overriding feature that will blow away the competition, but rather a bunch of small improvements that, collectively, make for a substantially improved email experience. My favorite feature is browsing by content. Like I said, I leave most of my documents and images in my email account, but that means it can be a pain to find them later on. Postbox lets users search through a specific type of content — right now it’s limited to images, links, contacts, and general attachments — and open a new tab where you can browse all the images or all the links within your inbox.

The service also makes it easier to connect your emails to the larger web. For example, when you open a message, a “web inspector” panel shows up alongside the text. It highlights content in the text and shows how that content can connect to the web. There’s a list of links, for example, plus an option to map any addresses, plus a web search box where you can copy and paste any of the text from the email. There’s also an option to upload attachments directly from your inbox to various web sites — right now Postbox only supports image site Picasa, but there are plans to add more soon. (Most of the webmail services I’ve seen are also trying to integrate with other web services, most recently with the application platform for Yahoo Mail.)

The last aspect that makes Postbox stand out is harder to pin down — again, it’s not so much a single feature, but how the integration of topics, to-dos, conversation grouping, and tabbed browsing makes my workflow much easier. Here’s an example: I knew that I wanted to write an article about Postbox today, so I set the status of the last email from the Postbox PR team as “to do”. I had already labeled the email as work-related, so the message was now pinned to the top of my list of work-related emails. I was able to watch as my work emails (distinct from my general emails, which are open in a separate tab, and basically ignored as I’m writing) kept raining down, but I didn’t have to worry about finding the relevant email again. Any incoming messages in that same conversation were immediately pulled to the top as well. And of course, Postbox also highlighted all the relevant attachments (like screenshots) in the inspector panel for easy reference.

There are a bunch of features that I’d like Postbox to add — document-only search, for example, and integration with WordPress — but you should check it out. 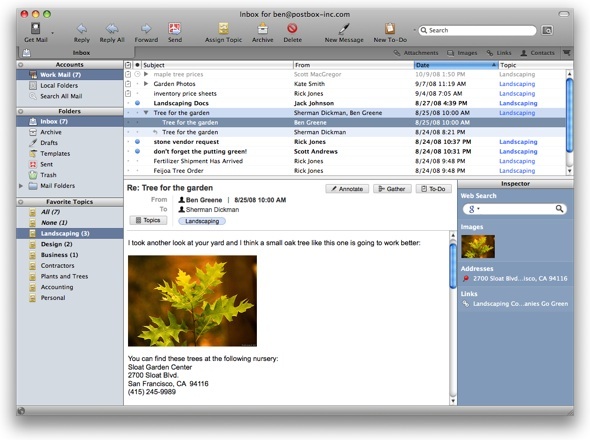