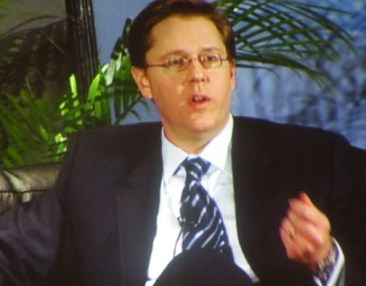 Federal Communications Commission Chairman Kevin Martin said at the International Consumer Electronics Show today that Congress should authorize more funds for converter box discounts so that more consumers will be prepared for the digital TV transition.

This week, the incoming Obama administration asked Congress to delay the transition from analog to digital TV — set for Feb. 17 — for a few months so that more people could get more coupons for digital TV converter boxes. Martin said there was more demand for the $40-off converter box coupons than originally expected, partly because consumers only had 90 days to use the coupons before they expired. Consumers can use the coupons to buy $100 or cheaper converter boxes that allow their old analog TVs to receive and display digital TV signals.

But Martin countered the Obama administration’s call for a delay. “If the coupon problem can be fixed without changing the date, we should do that,” he said.

The issue was top of mind when Martin was appointed a few years ago, and it’s still a top priority as Martin winds up his term. Since his appointment in 2005, Martin said he had few regrets about big decisions he has made about government policy on communications and technology.

“When you try to compromise and listen to all the parties, you wind up pissing everybody off,” he said. 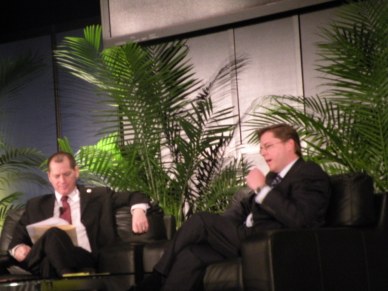 After Barack Obama is sworn in, Kevin Martin is not likely to last long as the Republican-appointed chairman of the FCC. But Martin said in a one-on-one chat with Consumer Electronics Association chief Gary Shapiro that his term on the commission doesn’t expire until 2011. Hence, even after the chairmanship passes to a Democratic appointee, Martin will still serve as a commissioner and contribute to the nation’s key decisions on communications and technology policy.

During their on-stage discussion, Martin and Shapiro also covered a number of other issues.

The Sirius/XM Satellite Radio merger. Martin said he had no regrets about taking a long time to approve the merger of Sirius and XM Satellite Radio. Critics said that the move would eliminate competition, but Martin said that the companies faced such big financial problems that a merger was inevitable. He also had to take into account that they faced a lot of competition from other sources of music, such as conventional radio, Internet radio, and even Apple iPods.

Necessary changes to the FCC. There are some changes Martin would like to see made. Final votes of the commission should be made public and revise the law so that the commission can have more open debates of its policy decisions, Martin said. So far, other commissioners don’t want their votes to be made public, he said.

Mistakes. Martin said that when the FCC auctioned off the 700-megahertz spectrum, there was too much uncertainty related to emergency services requirements of the purchasers of that spectrum. As a result, there weren’t enough offers and Verizon wound up snapping up the auction that should have gone to a competitor.

Cable services. Martin would like to see more variety of cable servcies. He is happy there is more independent equipment being attached — via cable cards — to the cable TV system. That gives consumers an alternative way to get access to video. Martin said that rates for almost every kind of communication –phone service, cell phones, broadband — are down, but cable TV rate subscription fees are up. That’s wrong, he said, and that is why the government should still actively regulate the cable industry.

Blocking content. He said that when Comcast started blocking the accounts of heavy users of peer-to-peer video downloading, it was appropriate for the commission to step in and act as an enforcer. He also said that the V chip, which asserts parental controls over certain TV shows, was a good technology. But that the ratings used with the chip were inconsistent and confusing.

As for subliminal advertising, Martin said it is very different when it is Internet content that is deliberately pulled down from adults, rather than content that is pushed to consumers, particularly kids. He said he was excited to see Microsoft’s media player, Panasonic’s universal remote with a touch screen, mobile digital TV, the 3-D glasses TV demos, and the thin sizes of the latest TVs at the show.

His advice to his successor, who is expeced to be Julius Genachowski? Martin said he should not go back to old rules or it would risk endangering investment in the communications industry. He said his successor should also not be afraid to make tough decisions.