I’ve talked about the regrettable 3-D TV trend at last week’s Consumer Electronics Show (CES) in Las Vegas in a separate post. But I spotted some other trends among the 2,700 exhibitors at the show as well. 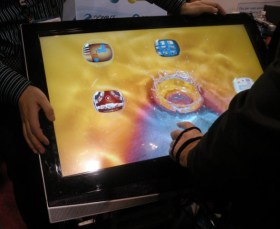 Gesture control and multi-touch screens: Part and parcel of good industrial hardware design is a good user interface to go with it. Now, the mouse, keyboard, and remote control are about to give way to touch-based user interfaces or gesture controls. Synaptics is adding a number of new gesture controls for laptop pads this year that let you do more things with just the flick of a finger. HP introduced a new business computer with a touch screen that can be used as a retail kiosk. Check out our earlier post on the gesture-controlled TV demos by Canesta/Hitachi, Softkinetics/Orange Vallee, and Sixense’s magnetic game controllers. The whole idea is to make gadgets that are easier to use and more engaging. 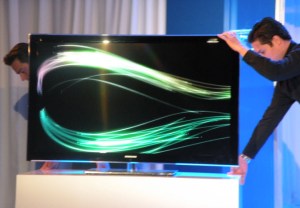 Simplicity: Gadgets used to come with thick user manuals. But why design something complicated? IPEVO created an elegant-looking digital picture frame that didn’t play music or videos. Instead, it just focused on displaying photos in high resolution. It was easy to control, coming with a remote or some simple controls on the base of the frame’s stand. Yunje Kang, vice president of design in the visual display division at Samsung Electronics, said that simple designs are also lower cost and more eco-friendly, since simple designs usually require less material and fewer industrial processes. That’s why Samsung doesn’t use paint on its TVs. 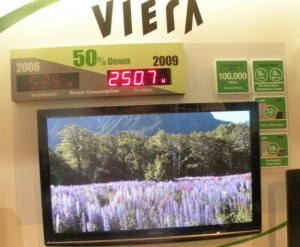 Green technology: For the first time we saw a large number of TV makers showing off flat panels that consume less energy. Last year, there were just a couple of low-power models. This year, most of the manufacturers had exhibits that showed how many watts the TV was consuming. And it wasn’t just TVs. Panasonic had a combo washer and dryer on display that consumed 50 percent less energy than conventional models. It saves 20 gallons of water per load compared to a traditional top-loading washer. It does so by tilting the washer basin, creating the same depth of water with a smaller amount. It saves on electricity because there’s less water to heat. The air is cycled, so there’s no need for a vent. That makes it good for apartment renters (although it’s available only in Japan now). Even HP’s latest gaming machine, the HP Firebird with Voodoo DNA, is advertised as a low-power gaming PC. Normally, game PCs consume an enormous amount of power. These are a few examples of how deep the green design movement has become. 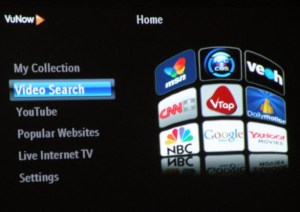 Connected TV: For years, computer makers struggled to get the web to the TV. The Microsoft Windows Media Center was a decent attempt to display computer entertainment on a TV, but it was hard to set up. Apple TV moved a step closer, but Steve Jobs admitted last year that Apple had only reached a hobbyist market.

Now the TV makers are loading up the TVs with WiFi wireless networking and web links that you can access via menus and remote controls. The Verismo Networks VuNow user interface is a great example of how to organize a bunch of web videos so you can access them from a remote. The Yahoo Widget Engine uses the ticker along the bottom of the TV as a place for users to scroll through various web widgets for everything from weather to Netflix movies. It’s customizable too, so you can pretty much get to any web site that takes advantage of the development kit from Yahoo and Intel. It took about four years of work to get it right, says Patrick Barry, a vice president at Yahoo. Some of this content will be only a subset of what’s available via the PC. MySpace, for instance, will let you see friend requests and other updates in its Yahoo Widget application, but you won’t likely be sending messages. Yahoo anticipates that millions of TVs will be sold this year with its widgets on them. 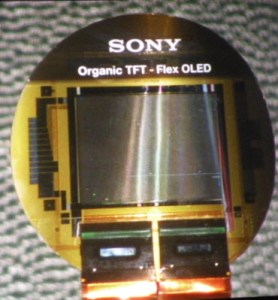 Thin TVs: Sony said it would introduce a tiny flexible display based on organic light emitting diode technology, which results in ultra-thin screens and brilliant colors. Sony chief Howard Stringer said Sony would have 20-inch to 30-inch OLEDs later this year and he showed off a flexible OLED display that you could squeeze or bend. Samsung and LG showed off liquid-crystal displays that were less than an inch thick. Samsung and LG also showed off liquid crystal display TVs that were less than an inch thick.

Wireless gadgets: Wireless is infiltrating more of the devices that used to be unconnected islands. Eye-Fi launched a memory card that uploads videos directly to the Internet from any video camera. CrestaTech created a way to get region-free digital TV on a laptop just about anywhere. Amimon showed it can transfer high-definition video to just about any room in the house, while SiBEAM can transfer video at high speeds to devices 30 feet away. And Atheros Communications created peer-to-peer networking that lets a digital camera bypass a PC and print directly to a wireless-connected printer. Coolest of all: Netgear displayed a Netgear 3G Mobile Broadband Router that can use cell phone signals to deliver a broadband connection to you while you’re camping or in a desert. 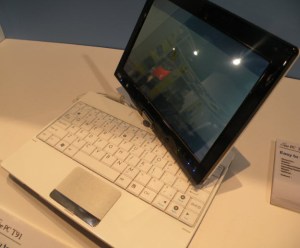 Netbooks: Asus paved the way in this category with its popular EeePC, a sub-$400 computer that’s smaller and less powerful than a laptop but is good enough to cruise the Internet. HP has launched its own lightweight series of netbooks, while Intel has launched a new version of its Classmate PC for developing countries. There were plenty of models out this year and you should expect more soon. If Nvidia can crack into Intel’s Atom platform with the Nvidia Ion graphics solution, then netbooks will likely have graphics that are good enough to run games. These models might cannibalize sales of more expensive laptops. Intel and Advanced Micro Devices hope that won’t happen. But consumers watching their pennies just might make this one of the big computer trends of 2009. 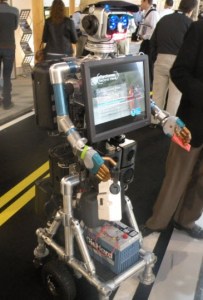 What was missing from the show? This talking robot (left) was cute. But I didn’t see any really outstanding robots at CES. That was a surprise, because I’ve become accustomed to seeing demos of robots like the humanoid Asimo robot from Honda. These things are getting more and more realistic every year. But I can’t say any of the ones I saw this year came anywhere near to stealing the show.