Venture capital funds raised only $3.4 billion in the last three months of 2008, according to new data from Thomson Reuters and the National Venture Capital Association. Unsurprisingly, this is a big drop (about 70.9 percent) from the same period in 2007, when venture firms raised $11.7 billion, and also a substantial decline from the $8.4 billion raised in Q3 of 2008.

Now, you’re probably as tired as I am with the barrage of bad news, but it’s probably not going to stop anytime soon. And these numbers are significant because they’re some of the first we’ve seen to quantify the effect of the late September/early October financial crash on the venture industry: After all, the Q3 numbers from Thomson Reuters and the NVCA mostly reflect fundraising before the crisis, while the survey of VCs predicting that the IPO market won’t pick up until 2010 was just (educated) speculation.

The number of follow-on funds (basically, additional money raised for existing funds) compared to new funds also increased during Q4; the ratio of follow-ons to new ones was three-to-one, compared to two-to-one during the same period last year. Two of the quarter’s three biggest funds were raised by Accel Partners, which raised two funds totaling more than $1 billion. The second-largest fund was raised by VantagePoint CleanTech Partners.

Much of the drop can be attributed to obvious factors relating to the financial crash and the resulting market uncertainty, but NVCA President Mark Heesen also says many firms are busy investing the money they raised in the last two years. The NVCA will be releasing its numbers on Q4 venture investing at the end of the week, so we’ll soon see if that’s true. Let’s hope it is. 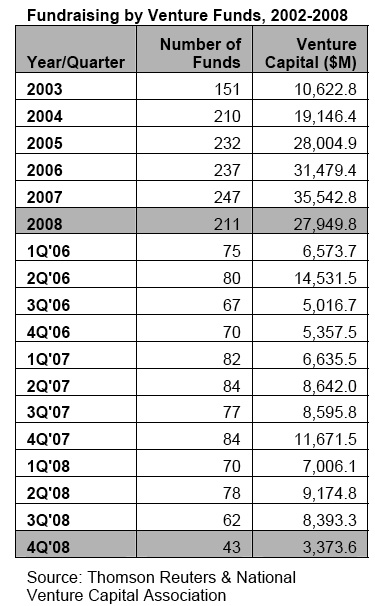