Solar energy company Ausra announced that it no longer plans to build massive solar thermal plants across the southwest and California desert due to poor economic conditions, shifting its focus to smaller-scale power generation plants. To weather the downturn, the Palo Alto, Calif. firm is also placing more emphasis on selling its technology and equipment assets to utilities and related companies. 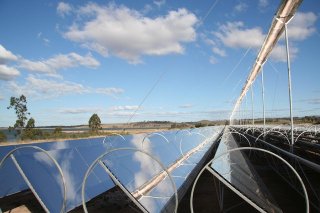 For most of 2008, Ausra was working on solar plants costing up to $1 billion, but its executives say the market won’t support such capital-intensive projects. It’s new business model, based on equipment sales, should prove more consistently lucrative. The company is known for its proprietary light-focusing mirrors — called compact linear Fresnel reflectors — used to channel sunlight to generate steam, turn turbines and create electricity. But plants aren’t out of the question. As chief executive Robert Fishman told the San Jose Mercury News, “Instead of one 600-megawatt project, we’ll do twelve 50-megawatt projects.” It opened its first 5-megawatt pilot plant in Bakersfield, Calif. at the end of last year, and plans to sell its technology to companies that are engaged in building bigger facilities.

Ausra’s new strategy came with its share of layoffs — about a dozen of its 108 employees have been trimmed from the staff since December. Several executives have also chosen to depart: Greentech Media reports that Glen Davis, executive vice president and chief commercial officer, and Robert Morgan, executive vice president and chief development officer, left to jumpstart Agile Energy, the renewable company they worked for previously.

Ausra now says bigger plants probably won’t be part of its agenda unless it gets acquired by bigger fish, like PG&E. This doesn’t seem too far-fetched considering that the company already has a contract with the utility giant for a 177-megawatt solar-thermal plant in California (currently pending government approval).

An acquisition could be good news for Ausra investors, which include active cleantech players Kleiner Perkins Caufield & Byers and Khosla Ventures. Both firms have placed large bets on cleantech enterprises in the last year in hopes that the sector will weather the downturn a bit better than others. Then again, Vinod Khosla has had some tough knocks in this area. Verasun, the ethanol maker that he once praised as one of the most innovative companies in the industry, filed for Chapter 11 in October.

According to an analyst quoted by the Mercury News, Ausra’s decision to scale back isn’t indicative of a broader trend for solar. But there is evidence to the contrary. Hayward, Calif.-based OptiSolar, a thin-film solar provider that also had a photovoltaic plant in the works, was forced to lay off half its workforce when it couldn’t find enough funding for the project. SunPower, a solar panel manufacturer in San Jose, Calif., just shaved 60 jobs from its staff. Cell maker Suntech Power Holdings cut 10 percent of its staff, and both Heliovolt and SunEdison recently laid off an undisclosed number of workers.

Even so, venture capitalists don’t appear to be souring on solar opportunities. Ausra itself last raised $60.6 million in October on the heels of a $24.5 million investment in August. And its Bay Area peers Solyndra and Nanosolar both saw an avalanche of funding earlier this month — bringing in $219.2 million and $300 million respectively.