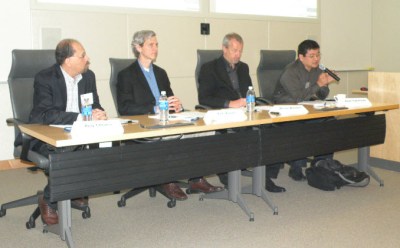 Every few months I like to take the pulse of the venture capital market. It chages so fast that you don’t really know what’s going on until you catch up with the people in the thick of things.

I had a chance to do that this week while moderating a panel of three venture capitalists for the Telecommunications Industry Association. Before a small crowd at Cisco’s headquarters in San Jose, Calif., the VCs — Ajay Chopra of Trinity Ventures, Eric Zimits of Granite Ventures, and Michel Wendell of Nexit Ventures — painted a familiar picture of how tough it has become to raise money. They also talked about the sectors in the telecom and media spaces that still look attractive.

Sure, the National Venture Capital Association reports are relentlessly depressing, telling us how far the venture business is sinking. But this panel, which was more like a focus group, offered a view from the ground floor. 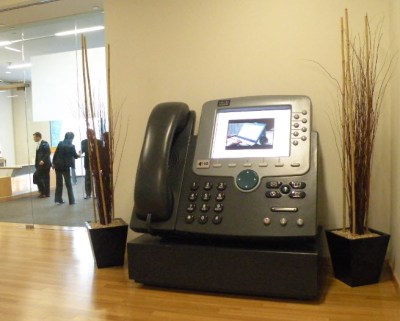 Chopra is fond of the old saying, “When the tide goes out, you can see who isn’t wearing any underwear.” The VCs are aiming for quality, or the best companies. He said the name of the game now is capital efficiency. Start-ups have to go a long way with what they’ve got, perhaps as many as 18 months. Companies with traction, sound business models, and some runway will look attractive. Chopra says his limited partners aren’t paying him to sit on money. Proven entrepreneurs with good ideas are worth betting on. The companies need to have a plan for two or three years down the road.

Zimits also said that limited partners aren’t paying the VCs to hide under their desks. He is more sensitive to the environment, capital intensity, co-investors. Basically, he has to make sure the people he is in the boat with are going to stick it out for the long run.

And Wendell said that VCs are still looking for companies who don’t need to have a product on the market in the next 12 months. That is to say, if a company gets a seed round now, it won’t be surfacing with a product for some time. The companies that need more funding to get a product to market in the near term are the ones that are in a tough spot, Wendell said. Those companies will have the hardest time raising money and will have an equally hard time launching a product right now.

Within the telecom sector, Wendell said that WiMax was obviously taking a hit, as evidenced by Intel’s big write-down of its billion-dollar investment in Clearwire. In the long term, he believes that LTE high-speed data/voice will likely fare better because it isn’t as near-term as WiMax is. He noted that the iPhone’s popularity is creating a lot of opportunities for its application and service developers.

Chopra invested in MyNewPlace, an apartment finder company. Trinity figured it would be a good investment in 2007 because people were just beginning to lose their homes to foreclosures. Another one is Bill Shrink, which helps you shrink your various monthly bills based on your usage behavior. It can cut your mobile phone bill, for instance, by making recommendations for better rate plans.

Zimits said that telecom had a lot of momentum going into the dotcom boom. Then it all fell apart and slowed down. The Internet is still growing, but not at a pace that justifies wild enthusiasm for some of the infrastructure players. He said there is still a lot of opportunity in the mobile device markets. Carriers are managing the relative openness of their networks very carefully so that they don’t become marginalized as ownes of pipes. Mobility, home entertainment services, connected TV and home networks look interesting to Zimits.

Upgrading the internet so it can handle the delivery of high-definition video over the web is an area where Chopra has invested. Most of those investments are in software companies that don’t require tons of capital. Zimits said that he believes that viewers are ready to watch video from the web on their TVs. They don’t mind going to sites like Hulu.com or YouTube where they can bypass traditional programmed content.

Wendell said that the question is what’s the business model that can properly deliver that content to consumers. People now want the freedom to consume content any way or anywhere they want. Those who limit the free flow of content are standing in the way.

Wendell believes that open source companies will be trendy. His firm invested in Funambol, which uses open source technology to make email available on thousands of handsets as cheaply and efficiently as possible. Zimits recently invested in Lucid Imagination, based on the Lucene open source technology behind enterprise search. A lot of big enterprises, like Netflix, have built their products around open-source search based on Lucene. Lucid Imagination helps support companies using Lucene.

Another good example of a capital-efficient company is Quantance, an analog chip company that Granite invested in. VCs are running away as fast as possible from chip investments. But Zimits bet on them because they are in the analog/RF chip space, where the skill of the chip designers is really important, not the number of chip designers. Quantance got its first chip done with just a dozen people. The key is that the talented veterans are able to be creative and capital efficient.

Zimits said that the definition of early-stage companies has changed and VCs are now steering toward some of those companies now, since they won’t depend on launching in a healthy market for a few years from now. Chopra said that early stage companies are competing with late-stage, heavily discounted deals now. Wendell says his venture fund is also starting its own companies, writing the business plans, and getting the ideas into good shape.

While getting eyeballs and users was the name of the game in the past few years, now the big emphasis is on getting customer traction and becoming profitable.