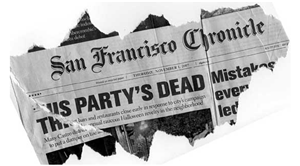 The San Francisco Chronicle, the San Francisco Bay Area’s largest newspaper, may have to be shut down if it can’t lay off a significant number of employees within weeks, its parent company Hearst said in an announcement.

This is just the latest announcement in an industry that is reeling from a downturn in readership and advertising — where several bankruptcies have been announced over the past few days, including the Philadelphia Inquirer.

…[The company said] the Chronicle lost more than $50 million last year and that this year’s losses to date are worse. The Chronicle has had major losses each year since 2001.

“Because of the sea change newspapers everywhere are undergoing and these dire economic times, it is essential that our management and the local union leadership work together to implement the changes necessary to bring the cost of producing the Chronicle into line with available revenue,” said Frank A. Bennack, Jr., vice chairman and chief executive officer, Hearst Corporation, and Steven R. Swartz, president of Hearst Newspapers. They added, “Given the losses the Chronicle continues to sustain, the time to implement these changes cannot be long. These changes are designed to give the Chronicle the best possible chance to survive and continue to serve the people of the Bay Area with distinction, as it has since 1865. Survival is the outcome we all want to achieve. But without the specific changes we are seeking across the entire Chronicle organization, we will have no choice but to quickly seek a buyer for the Chronicle or, should a buyer not be found, to shut the newspaper down.”

None of us in the industry can be surprised by this. I remember hearing more than three years ago that the paper was losing $1 million every week, and being flabbergasted that the company could withstand those losses and not do anything about it (it took years for the company to get serious about trimming costs). That was during an economic expansion. It’s just amazing how slowly the industry has moved. Though you can also ask how many options newspapers had available to them, aside from cutting costs that is. With the barriers to entry into media extremely low, and advertising free to move away, incumbent players were going to suffer regardless. This will only get worse.