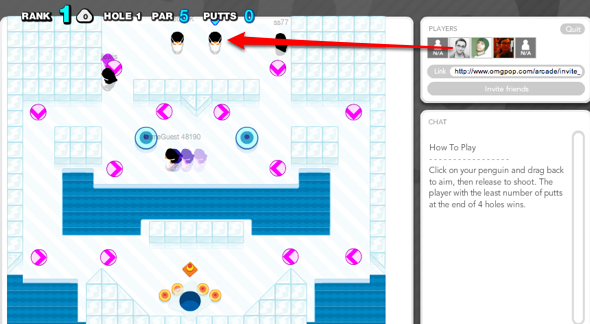 OMGPOP, the new brevity-focused name for the casual gaming site formerly known as Iminlikewithyou, says its half a million users are spending more than 180 hours on the site each month. That activity has positioned the company to introduce a new subscription service, a virtual currency and virtual goods, it says. Although it still isn’t profitable after raising a first round of $1.5 million last summer, the money-making potential has convinced investors to put a $5 million second round into the company.

Despite the newly-shortened name, New York-based OMGPOP is in heavy competition with a plethora of casual games on social networks, mobile phones and other web sites. But its Flash-based games — like one called “Putt Putt Penguin” where you use your mouse to bounce a virtual penguin into a virtual golf hole — are especially well-designed to get you to continue playing, as the site’s traffic numbers suggest. If you join the penguin game, you’ll be automatically paired with other site users; instant message features and a points system encourage you to talk trash (or flirt) and compete to be the best. Playing a game only takes a couple of clicks, and the games tend to suck you in.

I asked the company’s new chief executive Dan Porter, who joined from Virgin last month, about its revenue plans. Here’s what he came back with:

Right now we have a star account which you can see and learn about on the site [The company’s blog post on the matter, here]. That is currently in beta but its the first step towards a premium subscription model. That will be live for pay in late Q2. After that we will roll out a virtual currency which you can buy and earn and which will allow you to get two types of virtual goods: in game items that enhance gameplay and cosmetic items for characters and profiles etc.

The star accounts Porter mentions are another example of the company cleverly tapping into its users base emotion of wanting to be special and better than the other visitors. You have to beseech the company for a star account; if you get one, you get special powers like gaining points 50 percent faster than the other plays. How much might users be willing to pay for such accounts? Who knows.

Porter adds that the company is building its technology in-house but game rewards (prizes for real-life movie rentals, or whatever) will be done by outside companies. Super Rewards, Offerpal and others already provide such rewards service for many casual gaming sites and social networking applications, so it will likely partner with one of those companies.

This round was led by Bessemer Venture Partners with past investors Spark Capital and Baseline participating.