Virtual goods are becoming a staple method for casual game developers to make money from their users — and a range of third parties are offering services to help them do so. The latest is Gambit. Developed by a three-man team that started out building casual games itself, the company is launching today with some big claims. By optimizing gaming payment systems and offering additional support features, it says it can significantly boost the CPM (cost per thousand impressions) rates of a game and make developers more money than their rivals. One example is the popular Facebook virtual farming app myFarm, which saw its application CPM go from $350 to $544, according to Gambit co-founder Noah Kagan. 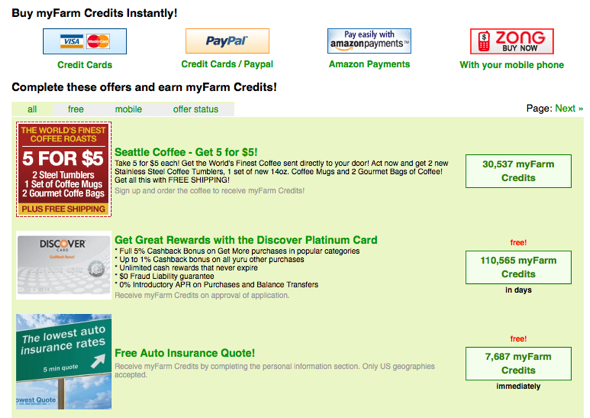 Gambit uses algorithms to figure out what sort of payment system is best suited for a given game, like how scarce the currency should be. Similar to its competitors, it lets users “earn” virtual currencies for use within games through completing third-party rewards for buying ringtones, taking up credit card offers, etc. (see screenshot), or through direct credit card and mobile payments. So if a MyFarm player really wants to buy a new virtual barn, Gambit will help MyFarm figure out how much to charge them for the credits required for barn-building.

A game focused on adults may find more users willing to use Amazon; a game focused on teens may find more users wanting to use mobile payment service Zong. Games drawing younger, poorer users could make more money if they make goods cheaper. When game players decide to take up more offers or pay more money, the CPM rates for payment pages go up — and the developer and Gambit make money.

Note: If you’re confused by this use of the term “CPM,” see this very detailed explanation from Andrew Chen. Basically, the ad industry term means the daily revenue an ad brings in divided by daily ad impressions times 1000; in the social network gaming world, it means daily revenue divided by daily uniques to the payments page times 1000. Other factors, like a game’s total active users, determine how much a developer will actually make based on their “application CPM” rates.

Other companies, like OfferPal, Peanut Labs and Super Rewards, are trying to provide similar payment services for game developers.

Kagan and co-founders Andrew Hunter (previously at Ning) and Chris Smoak (from Amazon) first built their own fantasy sports games for social networks. They were attracting millions of users — but when they tried to monetize them through other payment services, they discovered their own efforts worked better. Six months ago, they decided to become a payment platform for other game developers as well. They soft-launched three months ago and now claim to have over 50 clients, representing around 15 percent of the top casual games on Facebook and MySpace.

Gambit is also looking to expand beyond social networking gaming applications. It is already working with the SmallWorlds virtual world, and has helped the company double its CPM rates, Kagan says. The launch today isn’t fully open — developers have to apply to begin using Gambit. In the future, it also plans to introduce a subscription service for games.

The Berkeley, Calif.-based company has raised angel funding from Epinions and Genoa founder Naval Ravikant of incubator HitForge, and isn’t looking to raise more at this time.