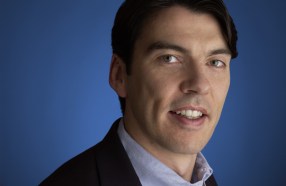 AOL announced today that it has hired away Tim Armstrong, the head of Google’s sales organization, to become the company’s next chairman and chief executive. Armstrong, whose official title at Google was senior vice president of sales in North America and Latin America, has been credited by many with building the search giant’s Goliath online advertising business — and will now try to work the same magic at its faltering peer.

Armstrong will replace chief executive Randy Falco and president Ron Grant after a short transition period. The change is clearly motivated by AOL’s poor performance in recent months and years. Industry insiders and tech pundits alike have been calling for its leaders’ dismissal for a while. Not only does it continue to hemorrhage dial-up subscribers, but it has failed to gain traction in any other major sector of the internet as consumer preferences evolve. Its revenue fell 20 percent in 2008 to $4.2 billion, led by a 31 percent drop in its subscriber business, which has now dipped below $1 billion.

Few people realize that AOL — which saw the bulk of its success in the 1990s as an online access service — has its own fledgling internet search engine. Google (and Armstrong, for that matter) is no stranger to this division of the AOL organization. In 2005, it invested $1 billion in the company in exchange for a 5 percent stake and profit-sharing to help it serve search advertising. AOL’s addition of Armstrong will no doubt magnify focus on this segment of its business. His primary charge, as Reuters notes, will be to prepare AOL to spin out of parent company Time Warner, either to stand on its own or merge with a partner like Yahoo. A smarter advertising strategy will obviously be vital in both scenarios.

Incidentally, it was speculated that Armstrong was on Yahoo’s short list to replace departed chief executive Jerry Yang. But that was not to be. Armstrong’s tenure at Google stretches back to 2000. Before that, he held executive sales posts at Snowball.com, Starwave and ABC/ESPN Internet Ventures.