To celebrate its one-year anniversary, Hulu launched its brand new social networking feature Hulu Friends today, allowing users to connect the video site to their Facebook and MySpace profiles. The service will record users’ Hulu activities on their newsfeeds, allowing them to discover new videos watched, recommended and shared by their friends and other Hulu users. They can even tie in their Gmail, Hotmail and Yahoo address books for broader reach across their entire social orbits. 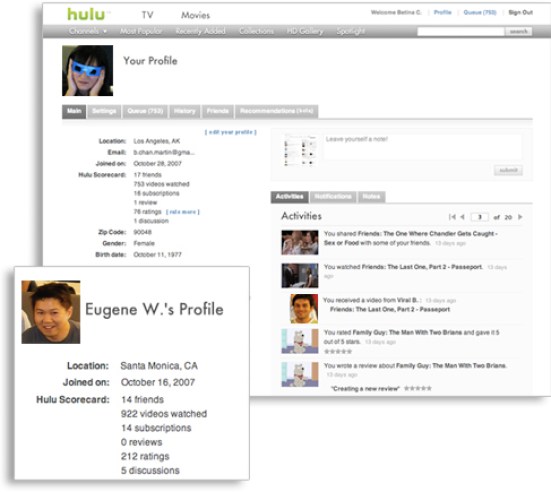 Now, when you sign into Hulu, you’ll find a bunch of new options that let you create a detailed social profile, and a new interface not all that different from Facebook’s with tabs to view a feed (called a Hulu “Scorecard”), profile data, friends, etc. The launch of Hulu Friends marks the site’s debut into online community building, and is probably the first of many developments in this direction. After all, this type of feature will open a gold mine of behavioral user data that the site can tap to attract and hike the price of targeted advertising. Some have griped that Hulu Friends doesn’t leverage OpenID when it has a ripe opportunity, but this is probably on the way.

Hulu may be late to the social networking game — competing sites like Joost have already added social elements — but it should have the content, traction and backing (owners General Electric and NBC Universal) to blow earlier adopters out of the water.

Hulu has grown exponentially over the last year, streaming over 300 million videos last month, up from the 88.2 million it streamed last May when comScore first started tracking the site. The figure jumped 33 percent between January and February alone — making it officially the No.2 video site on the web after YouTube. The Wall Street Journal postulates that the addition of social networking features will land the video site squarely in the domain of internet media, making it less of a threat to mainstream television. But this seems like an odd assessment considering the strong tide toward online TV viewership. If anything, the new features should accelerate the trend.

In addition to Hulu Friends, the site is also adding an avalanche of content today, including new television shows, more seasons of older series (including Friends!) and more classic movies. So, it may be Hulu’s birthday, but it looks like its users are the ones getting the goodies.