Keeping track of birthdays online is a drag. Sure, every social networking site now has a system for reminders. But, unless you have the same group of friends on every site, a lot of those reminders end up spread out across the web. MyPunchbowl, an upstart event planning site, has a solution: a centralized Birthday Reminder service.

The premise for MyPunchbowl’s newest product is simple. The company’s web-based Birthday Reminder service lets users store, categorize, and manage numerous birthday reminders within a single application. Regardless of whether a user wants to remember when their boss turns 55, or when Twitter turns three, the Birthday Reminder service offers prompt reminders and referrals to MyPunchbowl’s other event planning applications.

Users can sign up for the service through the MyPunchbowl site (or via Facebook), allowing them to seed the tool with birthday info gleaned from their social network(s). For contacts who don’t have birth dates stored in Facebook or Twitter (which seem to be the only two automated partners at launch), the Birthday Reminder service can help users send friendly automated emails requesting the info. 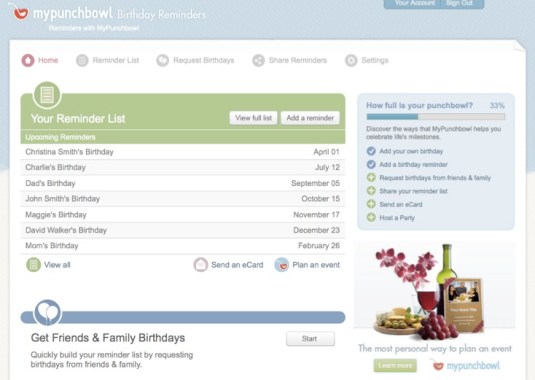 Once the information has been collected, users can organize the contacts/birthdays into customizable groups like “friends,” “immediate family,” “colleagues,” and yes — even “pets.” After organizing and prioritizing contacts and birth dates, users have the option of sharing reminder lists with others, and even toggling the frequency and times of the reminders.

Although I’ve seen my share of reminder/event tools, what makes the Birthday Reminder service interesting is its call to action. Whereas Facebook and MySpace mostly leverage birth dates for gift giving/micro-transactions within their sites, the Birthday Reminder service folds seamlessly into MyPunchbowl’s activity driven focus by referring users to its party planning application and free eCards. From there, it kind of makes sense to transform static birthday reminders into…well, actual birthday parties.

MyPunchbowl raised $2.1 million in a Series A in September 2008. The round was led by Contour Venture Partners in conjunction with angel investors Intel Capital and eCoast Angels. Rivals include Evite, Pingg, Socializr, and Anyvite.