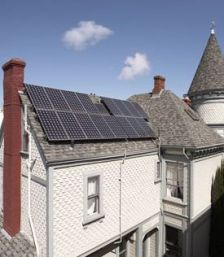 Hard economic times mean fewer consumers will shell out for expensive solar panels. Also hard hit are startups that offer no-money-down programs to lease panels or buy their power but can’t find banks to partner with. So, teaming with SunRun — one of the few outfits that still has a healthy line of financing — is a minor coup for Virgance, a company that plans to sign up thousands of new solar users.

I’ve written about what Virgance does in the past, but the quick version is that they run word-of-mouth campaigns to get hundreds or thousands of people to sign up for solar evaluations of their homes. Those that are interested in installing panels are then formed into groups, allowing Virgance to use collective bargaining to cut the total price by up to 25 percent — often saving thousands of dollars.

But it still costs many thousands more to buy a solar system up front, even with government rebates. The recession isn’t the only thing that keeps regular people from adopting solar — it’s the consistently-high price. Outside of affluent neighborhoods in San Francisco, about 80 percent of prospective solar customers said they needed financing, according to Steve Newcomb, Virgance’s chief executive. “It’s that difference between paying about $10,000 and just a thousand up front,” he told me.

From Virgance’s anecdotal experiences, it sounds like there’s a huge market of middle class customers who haven’t yet found an attractive enough financing option to seriously consider solar. In hopes of testing that theory out, the company will have SunRun back up all of its financing with the $100 million credit line the latter has from US Bank — enough for over 2,000 full-size systems.

The plan is to use this year to expand the program, run by a Virgance division called One Block Off the Grid (1BOG), outside of California (the company’s multiple other divisions will be represented at its Equinox event in a week). The Bay Area and Los Angeles have had their own successful campaigns, signing up hundreds of customers in each area, and Newcomb claims grassroots demand for 1BOG in places like Denver and New Orleans has been strong.

But there’s still plenty of work to be done. Ed Fenster, SunRun’s chief executive, points to a number of factors that will determine whether rooftop solar can be successful in other states, including the strength of sunlight, power prices and rebate programs. Also problematic are some state regulations. Colorado, for example, will need to change laws that prevent a company like SunRun from owning small solar systems.

Unfortunately, that ownership is the basis for the company’s power purchase agreement model so that the consumer only pays for the power, not the panels. Fenster says new rules are under consideration in the state. But ultimately, spreading solar across the country will require the two companies to innovate in a more outlandish area: lobbying politicians. And that may be the best indication yet that solar has finally entered the mainstream.