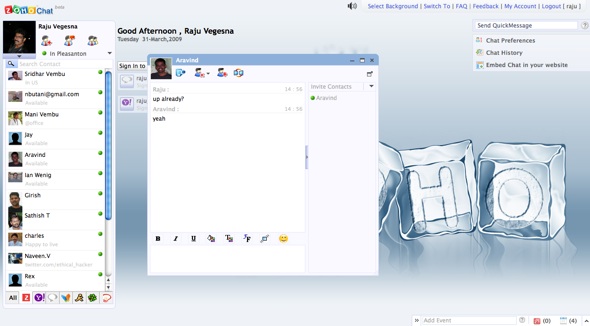 Zoho, a company offering a wide range of low-cost web applications for productivity and business, is launching version 2.0 of its instant messaging client, Zoho Chat. The biggest change is both simple and absolutely crucial — Zoho Chat now allows users to log in to other instant messaging programs, such as Yahoo, Google, MSN, and AIM.

Now it’s hard to get too worked up about a instant messaging tool, especially when there are many other, more popular options out there. But Zoho evangelist Raju Vegesna says the point of Zoho Chat isn’t to be just another IM service. Instead, it’s “the common bus that runs across most of Zoho Applications.” In other words, it lets users chat in almost any Zoho application — for example, they talk to a co-worker while collaborating on a document in Zoho Writer. (That’s someting Google allows in a few applications like spreadsheets, but not in word processing documents.) It also lets users carry their chats between applications, so they can continue conversations as they move, say, from Zoho Mail to Zoho Writer to Zoho Meeting. For a company whose biggest strength may be the integration between its many applications, enabling that kind of flexible, ever-present communication is key.

Until now, the big missing piece was that you could only use Zoho Chat to communicate with other Zoho users, and now that barrier has been removed. (This echoes Zoho’s move last year to allow users to log in with Google and Yahoo accounts.) Another cool new feature is Zoho Chat’s integration in Zoho Calendar, which doesn’t just allow users to chat while looking at a calendar, but also to add items to the calendar within the chat window. Also new is the ability to chat with to create a group chat with just a click, and to embed your chats on a website.

Zoho is a part of Pleasanton, Calif.-based AdventNet. Vegesna spoke about Zoho’s vision at our Productivity 2.0 panel at the DEMO conference last month. In the video below, you can see him offer an overview of the different ways Zoho integrates its many applications, including Zoho Chat. (His presentation starts about 45 seconds in.)