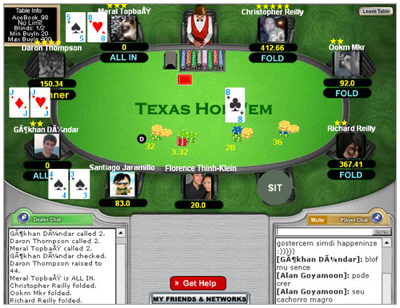 While Asian web companies are making millions if not billions of dollars on virtual goods, it hasn’t been clear how the business model is panning out in other parts of the world. So here’s another data point. Maybe.

We’re hearing a rumor similar to one a few months ago that San Francisco-based social gaming company Zynga is doing quite well for itself. Specifically, it’s making between $50 million and $60 million annually in revenue, mostly from virtual goods like poker chips in its Facebook poker application, according to an industry insider.

[Update on 4/6/09: A new source tells me that this number may be at least two times too high, although the information this source heard was from a month or two ago.]

Last January, reports surfaced that suggested the company was making between $30 million and $50 million. Zynga wasn’t commenting then, and it’s not now. But what founder Mark Pincus has said at conferences and to the press in the past indicates things are going well. It has been break-even or profitable nearly every month since September of 2007, and it currently has 195 full-time employees with 30 or so more contractors. Assume the company is paying its workers full benefits — for an average of around $100,000 per person — one can guesstimate roughly $20 million in costs on that front. And then there’s infrastructure expenses like servers and bandwidth. In other words, the latest rumor doesn’t sound too far off.

To put that in perspective, the exemplars of virtual goods money-making are companies like the China-focused Tencent web conglomerate, which made more than $1 billion last year, mostly from virtual goods. And yesterday, Chinese portal Sohu.com successfully spun off its ChangYou gaming division to be a publicly traded company based on revenues of more than $200 million from virtual goods.

I’ve also heard that Zynga rivals like London-based Playfish and Silicon Valley-based SGN are also doing quite well for themselves. Except we haven’t heard specific revenue numbers — so if you know more, email me: eric (at) venturebeat (dot) com.