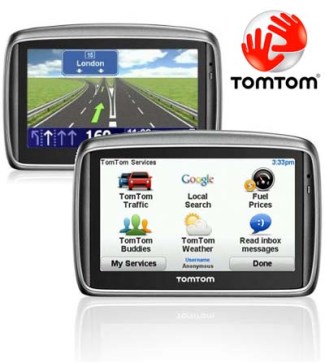 Navigation system maker TomTom has struck a deal with startup TrafficCast International to provide its users with continuously updated traffic and weather conditions, as well as nearby gas prices, right on their compact device. All of this data will be folded into its Go 740 Live device, TomTom’s first wireless model with traffic information to launch in the U.S.

GPS companies like TomTom (and its nemesis Garmin International) have seen some sales erosion due to smartphone applications that provide pretty much the same services. Several — like the built-in “Maps with GPS” or the “California Traffic Report” for the iPhone — also track traffic and can reroute trips accordingly (though many of them are confined to particular geographic areas). That doesn’t help much with a statewide or cross-country drive. With its new capabilities, TomTom is hoping to recover some of the lost market share in these areas.

The Go 740 Live will retail for $400, the company says, including three months of service. After that, users will have to pay a fairly low fee of $10 a month to keep it going. Financial terms of the deal between TomTom and Madison, Wisc.-based TrafficCast have not been disclosed, but VentureWire reports that the latter company will get a share of every device sale.

TrafficCast has raised $3.5 million in capital to date frob backers Ceres Venture Fund, New Capital Fund, Phenomenelle Angels Fund and Women Angels. The live traffic information lets the big navigation companies take a step closer to realizing the vision of Dash Navigation, which tried to pioneer the  concept of real-time traffic information via two-way communication with drivers. A number of companies are working on similar ideas, including Nokia, which recently showed off a research project on real-time traffic.