Cars and the TCP/IP protocol — the protocol that regulates transmission from sender to receiver over the internet — have been a difficult equation to solve. Downloading emails or surfing the web might work, but when it comes to, say, streaming media or using VPN (Virtual Private Network) security, cars and the Internet don’t seem to play well together yet. The problem is handover. When a cellular device moves its connection from one tower to the next, services like YouTube that maintain a persistent TCP connection have to re-establish the connection, which means the video just stops or stutters. Normal handovers can’t keep the transmission connected while the vehicle is in motion. Additionally, the transmission will be troubled with latency problems when signal speed is too slow.

Autonet’s solution is to alter how a mobile car router works with the TCP/IP protocol. Internet services that need a constant connection to work can function at lower speeds, and the user is not forced to restart the session. Autonet’s system also monitors signal strength and packet loss (information over the internet travels in different ‘packages,’ each with its own discrete address, reassembled at the receiver’s location) and trouble-shoots these issues. 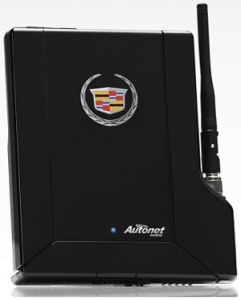 So the technology is there. But with new-car sales currently at rock bottom, this might not be the best time for a startup to target the car industry.

Autonet sells its systems both to car manufacturers for inclusion in new cars and to car owners via auto dealers or stereo shops. The internet service is provided and charged for by Autonet. The Manufacturer Suggested Retail Price is $499 and the monthly Internet subscription is $29 a month for 1GB of data and $59 for 5GB. Autonet has been equipping Chrysler cars with internet since August 2008 and recently closed a deal with Cadillac through which its technology will be installed in the CTS Sport Sedan. In May, according to CEO Sterling Pratz, the company will sign a deal with Volkswagen to equip its cars with internet connection. But the American market for car sales this year is expected to be the lowest in a decade. So the risk is that sales to car manufacturers might suffer despite those recent deals. Autonet might have to pin its hopes on car owners to show a direct interest for internet connection in the car.

There’s been little research done on the size of the market for in-car internet access, so it’s a bit hard to gauge what Autonet’s prospects are. But car owners can be a difficult target group, let’s not forget Dash Navigation, the Sunnyvale, Calif.-based company, that unsuccessfully tried to sell a GPS device with Web 2.0-like features so that people could get information such as real-time traffic reports.
Competitors in this field include Junxion and Waav. Car manufacturers like BMW and Mercedes are working on similar products. Autonet earlier raised a first round of funding from Morganthaler and Easton Capital and is currently looking for a second round of financing.