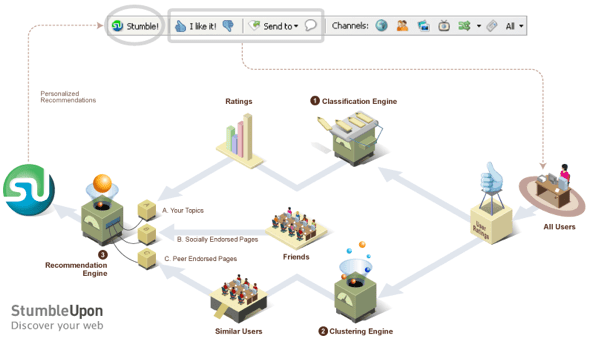 Social news discovery site StumbleUpon can be a great way to find interesting stories, which is why some of us wondered why auction site eBay bought it for $75 million in late 2007. Perhaps it was going to offer ways for news readers to buy eBay products? Apparently things never ended up fitting. StumbleUpon has spun itself out of eBay and is once again a startup, it announced today. This follows rumors last fall that eBay was looking to sell the site.

“We are grateful to eBay for its guidance,” said cofounder Garrett Camp in his company’s press release. “However, we realized there were few long-term synergies between the two businesses. It is best for us to part ways and focus on our respective strengths,” said Camp. “This change makes it possible for StumbleUpon to continue to innovate and focus on becoming the Web’s largest recommendation service.”

For its part, eBay isn’t saying much more than yeah, we’re an e-commerce company. For the same lack of relevance to its core business, eBay is also looking at selling off web-based calling service Skype — and that company’s founders are also looking to buy it back.

This isn’t to say that StumbleUpon has been standing still during its two years at eBay. While the company has relied on a browser toolbar to let people easily share stories they’re reading as well as discover new ones, it launched a new version of the site last fall that downplayed the toolbar in favor of making the site more accessible to new users. It has continued to develop its story-recommending technology, which includes a story classification engine, a clustering engine for types of users and friend recommendations (for more on how the site works, see our deep dive here).

The San Francisco company’s new investors include Ram Shriram of Sherpalo Ventures (who invested in StumbleUpon the first time around), Accel Partners, and August Capital, as well founders Camp and Geoff Smith. It claims more than 7.4 million total users, 425 recommendations per month, and some 20,000 advertisers.