MeFeedia, a video search company that many people haven’t heard of, says it has a whopping 7.6 million unique monthly visitors.

How? It’s playing in a crowded video search market, but it says it is distinguishing itself by using social information such as comments, ratings, and recommendations to categorize videos on its service. Competitors like Blinkx, VideoSurf and Pixsy use video file inspection techniques to help them organize content, and rely less on such social data.

MeFeedia, of Burbank, Calif., says that its way of indexing allows its search model to scale better than typical indexing methods. It cites the Obama Inauguration as an example: Hundreds (if not thousands) of videos have appeared across YouTube chronicling the event. MeFeedia says that using the social information surrounding those videos will help locate the “official” speech through tags and the like that in all likelihood is what the searcher is looking for, and places that higher in the results.

I wasn’t too successful in getting MeFeedia’s search engine to work as it’s intended. I typed in “Obama inauguration speech,” and only one of the videos was of Obama actually speaking. A handful of others were reports about the speech, and the rest had no relevance at all — including a video in the top three on rap artist T.I.’s prison sentencing. I’m not sure how Obama plays into that, but it looks like someone at MTV tagged the video “Obama inauguration” when the page was indexed.

Did I just inadvertently step into one of the pitfalls of MeFeedia’s way of indexing? I think so. 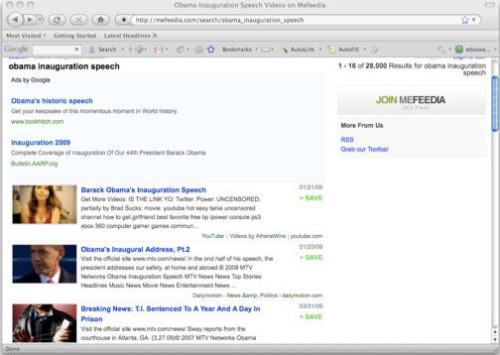 Search quirks or not, MeFeedia is pressing forward with becoming a one-stop shop for video across the web. The site has struck official partnerships with content owners including ABC, The WB, Hulu, Revision3 and others to allow users to stay on MeFeedia rather than having to jump from site to site.

“TV has many flavors. We see ourselves more as a way to organize the disparate digital video landscape,” CEO Frank Sinton told me. “We look at MeFeedia as a complimentary service to all media sites. The central value offered by MeFeedia is an ability to officially find and track video from almost anywhere.”

Having these partnerships keeps eyes on MeFeedia’s site, which in turn generates revenue for the company through advertising. Those revenues are shared when the ads appear alongside the partner’s videos on MeFeedia, although although the company would not disclose those arrangements. It also raised about $250,000 in capital in a funding round that closed in February 2008.

“At this point, we are a cash flow funded business,” Sinton said.

Still the company could eventually find itself outflanked by one of the web’s big video-hosting sites. It would just take a move by Hulu or YouTube to secure the same partnerships, and MeFeedia and the rest of its ilk could be out of business.

If YouTube and Hulu begin to secure partnerships from the same sources that currently allow MeFeedia to embed their content — MTV for example — but are able to win exclusive rights to that content, then MeFeedia loses its lifeblood — take the Hulu/Boxee tiff as an example of this. It’s not an impossible scenario. Hulu’s already shown a preference to control its content, and YouTube is already restricting embedding in some cases.