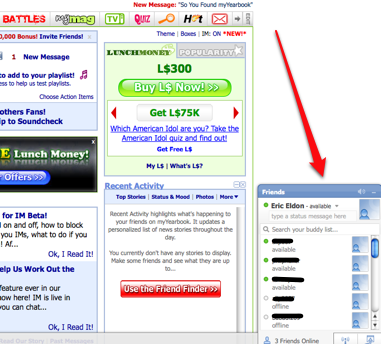 Do web users want instant messaging features tightly integrated into their favorite web sites? New data from instant message service Meebo suggests they do. The company introduced a white-label service last year so other sites could offer IM to users in the form of a toolbar at the bottom of their web pages. It includes ways to chat with existing friends on those sites as well as friends on Meebo’s home chat-aggregator site, or on other IM services like AOL’s AIM, Yahoo Messenger, and others.

The move followed social networks MySpace and Facebook adding similar IM features to their own sites — it’s a sort of way for smaller social networks like myYearbook (launching IM today) to offer chat without building it themselves. The promise of the concept is that users would chat on a site instead of leaving it to use another chat application.

Here’s the latest data: In March, the Mountain View, Calif.-based company says, 4.3 million unique users accessed its toolbar across 25 partner sites, with an average of 13 percent of these sites’ monthly US users using it, and sending around 30 instant messages per day. The Meebo rollout on teen social network myYearbook (something the two companies have been playing up since announcing their partnership last year) should boost those numbers, as myYearbook has around 11 million total users.

But how does one make any money on this? Meebo announced a plan last month to roll out interactive ads that are integrated into the chat toolbar, a follow-up to similar ads that it says have been working well on its own site.

What about competitors? Facebook and MySpace seem intent on letting other services access their IM service so completely that, well, Meebo was the first company to do so — you can chat with your friends on Facebook and MySpace within Meebo’s service. The two social networks don’t seem to be pushing toolbar-style features on the rest of the web.

However, AOL is. For more on that, take a look our review of what it’s testing out, here. This may be Meebo’s biggest competitor, but right now it’s months behind.