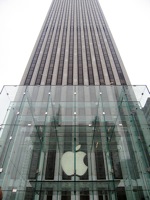 Apple may have just announced an impressive second quarter earnings, but that doesn’t mean everything is going gangbusters. Revenue growth has slowed at Apple’s retail stores, and the Cupertino, Calif. company just revealed via a filing with the Securities and Exchange Commission (spotted by CNET) that it has cut its retail workforce by 1,600 “full-time equivalents.”

Update: As Peter Kafka points out at MediaMemo, that term most probably means man-hours and not employees, per se:

But let’s be clear: Those aren’t 14,000, or 15,600, employees. Those are 14,000, or 15,600 “full-time equivalents” — basically, an accounting term that measures the number of man-hours Apple is paying for, not the number of men (or women) it is employing. So the very strong likelihood here is that Apple cut a lot of workers’ hours, but not workers themselves.

Revenue from the stores only grew 1 percent ($20 million) between the first three months of 2008 and the same period this year. The growth that did occur came from increased iPhone revenue and “strong demand” for MacBooks, which was offset by a decrease in the sales of iPods and other Mac products. (Mac sales dropped 3 percent overall.) And with the number of stores increasing year-over-year from 205 to 251, average revenue per store dropped $7.1 to $5.9 million.

None of this seems especially troubling, given the hits being taken by other tech companies and in retail more generally. Apple says it still has 14,000 full-time retail employees, and implies that it doesn’t plan to close any stores: “The Company would incur substantial costs if it were to close multiple retail stores and such costs could adversely affect the Company’s financial condition and operating results.”

Still, it’s worth pointing out this stumble, since Apple Stores the company’s public face, and are often seen as a symbol for the Cult of Apple — hence this spoof in The Simpsons, for example. (I also have a sentimental attachment to the Apple Store’s fate, since the first article I wrote for The Stanford Daily was about the opening of the first store.)