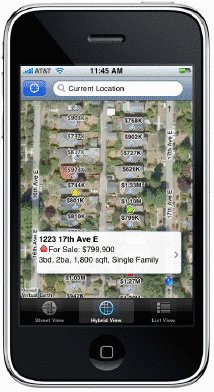 Real estate site Zillow is launching its own iPhone application, bringing price point information and other data on 88 million U.S. homes to users’ fingertips. Why they might need this cabability — unless they’re stalking the streets in search of a new house — is a mystery, but nevertheless. If that’s your thing, then you’re in luck — the app uses the iPhone’s built-in GPS to pinpoint your location and show price estimates for all of the homes nearby, moving along as you move.

After three years, Zillow has at least some data on 95 percent of the homes in the country, including photos and contact information for 3.4 million for-sale listings. The iPhone app will also provide users with information on recently-sold homes and bottom-line prices that homeowners would accept, the Seattle-based company says. They can also use the app to search for data on particular addresses, neighborhoods, zip codes and cities, even if they aren’t close by, just like on the site itself.

In its announcement of the app’s release, Zillow chief executive said, “Researching homes and house-hunting is inherently a mobile experience.” But is it really anymore? Especially with real estate tools like Zillow itself, it’s easier than ever to pinpoint the few properties you’re interested in and only view a select few. Regardless, the iPhone app might appeal to those who are simply curious about the relative ritzy-ness of various neighborhoods.

Parts of the application (those that don’t require the GPS) work on the iPod Touch as well. It’s free to download in the Apple App Store. Zillow’s prime competitor, Trulia, already has an iPhone app of its own.