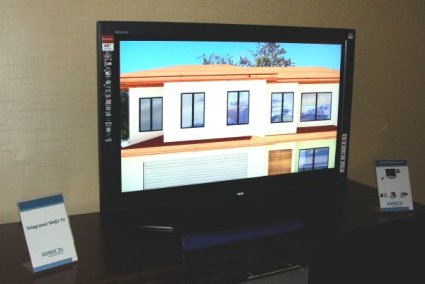 Amimon has managed to survive the wreckage of wireless video chip makers. And today, it’s taking the rare step of announcing its second generation of chip sets, which can transfer high-definition video from one part of the home to another.

The new generation goes a step further than the last in that it can transfer full high-definition video, which is defined as video in the 1080p format running at 60 frames per second, said Noam Geri, vice president of marketing, in an interview. The previous chip set could only do 1080i video at slower speeds. The new chip set is compliant with the Wireless Home Digital Interface (WHDI) industry standard, and it is expected to ship in customer products in 2010.

The chip sets are used in TV sets that can receive wireless video transfers from devices in other parts of the home. They’re also in devices like Blu-ray players or accessories for game consoles that transfer the data wirelessly.

In the past year, the Israeli company sold more than 100,000 chip sets and generated more than $5 million in revenue. TV makers such as Sony, Sharp and Mitsubishi sold tens of thousands of TVs that were bundled with add-on receivers. While the economy has hurt demand for high-end video systems, Amimon is benefiting from growing adoption of the WHDI standard. At some point, when costs have fallen dramatically with manufacturing efficiencies, TVs and other video equipment may come with the chip sets built in.

Amimon’s second-generation technology operates in the 5-gigahertz band, transmits data at 3 gigabits per second, and has a range of about 100 feet. It can pierce through walls and is very responsive. Since a rival technology, ultra wideband, has pretty much died on the vine, Amimon doesn’t have a ton of competitors.

SiBEAM is one rival that is using a different technology, based on the 60-gigahertz band of the radio spectrum, with higher speeds but shorter ranges. SiBEAM says it can transfer data at 4 gigabits per second. Panasonic has just begun selling equipment with SiBEAM’s chips in Japan. Another new rival is Quantenna, which uses the Wi-Fi protocol 802.11n to transfer video wirelessly.

The technology accommodates data loss due to interference and other problems, mainly by intelligently dealing with errors in data transfer. The technology deliberately ignores any visual errors that are imperceptible to the human eye.

Amimon’s advantage is that it began shipping early. It is also faster and had longer range than the now-moribund ultra wideband, which has lost supporters such as Intel, WiQuest and Tzero Technologies.
The latter two went out of business.

Amimon was founded in 2004 and has raised three rounds of funding and tens of millions of dollars to date. Investors include Argonaut Private Equity, Cedar Fund, Evergreen, Motorola Ventures, STATA Venture Partners, and Walden Israel. The company has nearly 60 employees.