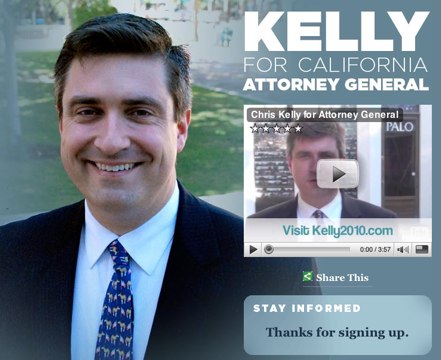 After four years as Facebook ‘s chief privacy officer, Chris Kelly has gotten a lot of face time with politicians and the media. He’s explained everything from the company’s ad policies in front of Congress last summer to its new terms of service in front of users this past February.

And now, following many rumors, he’s about to put his new-media brand to use — he’s officially announcing an exploratory committee for a 2010 election bid to be California’s next Attorney General. He’s running as a Democrat, his new site has just launched at kelly2010.com , and, yes, he also has a Facebook public profile page .

It’s not clear how Facebook would replace him, but it did hire Tim Sparapani away from the American Civil Liberties Union at the end of last month to be its new "director of public policy." At that time, a Facebook representative wasn’t commenting on Kelly’s possible attorney general run, and instead only told me that Sparapani would be reporting to Kelly, who in turn was reporting to Eliot Shrage, Facebook’s vice president of global communications, marketing and public policy.

Chris Kelly is a valued member of the Facebook Team and has been for the past several years. Chris is currently exploring a possible run for California Attorney General on his own time and in compliance with all applicable Facebook policies. If, over the next few months, Chris decides to devote himself full-time to campaign, he’s indicated that he will take time off or a leave of absence to do so.

Here’s more on Kelly’s background, in his own YouTube video (don’t mind the plane flying overhead at the start):