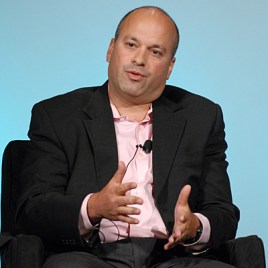 Google’s top advertising sales executive, David Rosenblatt, said he is leaving the company, in what some industry insiders are saying is the biggest shock yet about the steady departure of high-ranking executives.

We’ve already written about the flow of exits from Google, which comes in part because Google has become so large and ambitious employees see few reasons to stay. The amazing rise in Google’s stock price has come to an abrupt end, and it’s harder to do the fun stuff quickly as corporate bureaucracy sets in. This is nothing surprising and happens to all big companies, but the announcement from Rosenblatt (pictured left) is a blow because he leaves the company’s main ad display unit, DoubleClick, without a strong No. 2 to succeed him. DoubleClick was bought by Google for $3.1 billion two years ago, and Rosenblatt had stayed on as chief executive of that company, even after it was wholly owned by Google. It was the largest and most significant acquisition by Google, because it enabled the search ad giant to expand into the other main area of online advertising: display. The company is still being integrated within Google, and in October Rosenblatt took over the title of president of global display advertising.

We’ve already noted the rocky state of Google’s initiatives in advertising outside of search. The company had attempted to articulate a cross-media strategy, but it hasn’t come together as well as planned. YouTube, Google’s video business, is facing massive losses; meantime, Google’s radio division has been cut, and TV advertising is on life-support.

And by losing its main business and advertising executives, including Omid Kordestani, Tim Armstrong, Suhkinder Singh Cassidy and others, there’s increasingly the question of whether Google remains an engineering company that shows little sensitivity to the needs of advertisers. As mentioned, DoubleClick was used by the top 200 publishers or so, and many of them have become nervous about Google’s designs. One large publisher, Viacom, recently announced it was moving away from DoubleClick.

Google didn’t send out a release, but Rosenblatt did. Here’s an excerpt that VentureBeat obtained:

As you know, after eleven years of working for DoubleClick and one for Google, I have decided it is time to move on to the next phase of my career.  I will be leaving Google as of May 15.

I leave extraordinarily confident about the future of Google’s display business, and I continue to have no doubt that Google is the perfect home for DoubleClick.  Google’s display advertising strategy is revolutionary, and clients and employees will prosper as the company executes on that strategy.

As for my own future, in the near term, I will continue to work with the other companies that I am currently involved with.  I’m planning to take some time off this summer and then come back refreshed to think about what comes next in my life and career.