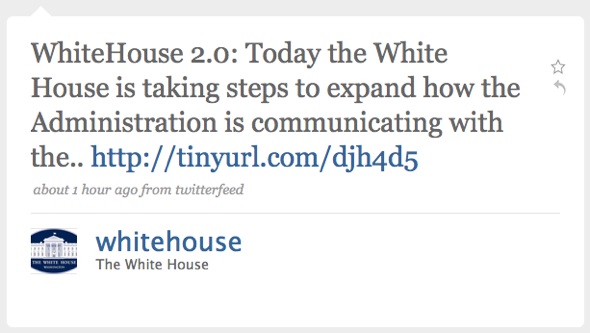 The White House blog today announced some new online initiatives that are part of President Barack Obama’s promise to “reform our government so that it is more efficient, more transparent, and more creative.” And what do these bold new plans for “White House 2.0” (the title of the blog post) entail? Basically, creating accounts on Facebook, MySpace, and Twitter.

Now, I certainly think creating an administration presence on all these social networking services is a great idea, but there’s nothing there yet worth getting too excited about, particularly since the White House already has accounts on photo site Flickr, video site Vimeo, and elsewhere. The White House’s tweets consist so far of a link to the White House blog, a link to a video of Obama playing basketball, a link to the CDC website about swine flu, and this message: “Welcome to the official Twitter page for the White House.” Transparency, here we come!

Hopefully, these pages will follow the same pattern as the administration’s other web efforts — they start out underwhelming, but improve eventually. For example, the White House blog originally contained little more than repackaged press releases, but it has become chatty and conversational. Meanwhile, until recently, the Recovery.gov site for learning about how the $787 billion stimulus package gets spent lacked any real data. Hopefully, with the White House’s new Chief Technology Officer Aneesh Chopra and Chief Information Officer Vivek Kundra, we’ll soon see many more improvements in this vein.