As the economic crisis has shown, running a company is risky business and executives don’t have enough tools that can help them steer clear of catastrophes. But supply chain software maker Aravo is launching a software service today that can help companies reduce their risks.

If the economic downturn has weakened a key supplier, this software will rate how stable or shaky that company is. And it will recommend that you find a second source, and then rate that company as well. The idea is to help companies examine their entire supply chain to find hidden risks. 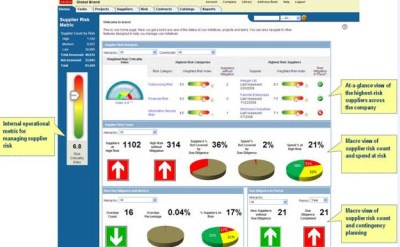 Do companies need this in an age of global transparency? Ask Mattel, which didn’t know that its Chinese toy suppliers were getting dangerous lead paint from sub-par contractors. Aravo Risk, as the service is called, exists because the world isn’t perfect, said Tim Albinson, chief executive of Aravo in San Francisco.

“This is timely because everyone now sees how much risk is out there,” Albinson said.

The service won’t work miracles. But it can provide enough checks and balances in the management chain to reduce the risk of catastrophic supplier failures, supply disruptions, and supplier compliance problems. Competitors include Ariba and Dun & Bradstreet, as well as other recently formed startups such as Supplier Force.

Nearly three out of four risk managers say their company’s supply chain risks have increased since 2005, according to a 2008 study by Marsh Inc. But those managers also say they only measure risks for roughly a quarter of the entire supply chain.

It also launched Aravo Sustain, which helps companies stay in compliance with environmental and labor regulations around the world and tailor their supply chains for minimal impact on the environment. Current customers for the other services include Accenture, General Electric, and Google. GE uses Aravo to manage more than a half a million suppliers in a bunch of languages.

More than 18 months in development, Aravo Risk will fill out the product line, offering things such as alerts that are triggered when risks start to escalate. Managers can look at the risk picture through a user interface that looks like a dash board. And if something goes wrong, the software can walk the manager through a contingency plan.

The company has raised $30 million from angel investors such as Charles Schwab; Stephen Friedman, former head of Goldman Sachs; Tony Mayer of JP Morgan; and Peggy Taylor, an early executive at PeopleSoft. The most recent round was in December. It has 75 employees.