DoubleVerify, a company that tracks the proper placement of online ads, officially launched what the company calls a “real-time” verification service today following a preliminary test period. The company will compete with Collective Networks and Mpire, among others.

The New York company has not identified its major clients yet, but claims that “a number of blue-chip advertisers including one of the top 3 banks, one of the top 3 telecommunication companies and one of the top 5 pharmaceutical companies” now require DoubleVerify monitoring on their ad buys.

How does it work? DoubleVerify does some human monitoring, but largely relies on a custom-built site crawler that renders Web pages and searches for wrong or misplaced ads. If there’s an error, the software program will create a screenshot of the offending page and flag it for inspection.

A chart prepared by DoubleVerify shows a real-life count of the percentage of ad impressions on five websites that did not meet the buyer’s specified terms. What’s interesting is that the chart shows all sites out of whack by 10 to 30 percent. One maverick site hit 70 percent non-compliance.

In the case study, shortly after DoubleVerify notified the sites and the ad agency that had placed the ads, four of the five sites cleaned up their act and dropped to zero non-compliance — at least for a couple of days, after which the number of mis-served ads on all sites began to creep up again. So it seems like DoubleVerify’s services will need to be ongoing. 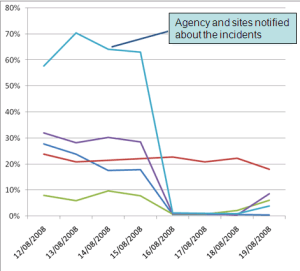 CEO Oren Netzer said in a phone call that DoubleVerify is different from Collective, mPire, and others because “We do comprehensive verification of campaigns, for premium sites as well as ad networks. We monitor for placement of ads against inappropriate content. We verify that all terms and conditions of the deal are met. Are the ads showing up high enough on the page? Are they on the correct site channels?” Netzer said self-verifed networks have an incentive not to report and fix misplaced ads.

The company, founded a year ago, recently raised $3.5 million in an investment round led by Blumberg Capital. Additional fund came from First Round Capital, Genacast Ventures, and from unnamed individual investors.